Our Bad: Fossil Identified as Lemur for More Than 100 Years Is Actually a Fish 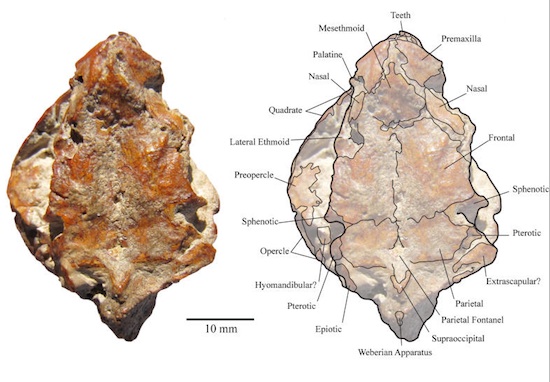 Identifying fossils is hard work. They are very old, pretty beat up, and more often than not represent only a fraction of the animal actually being represented, from which paleontologists work to recreate a model of the actual creature. Considering that’s like building a model of a human from a chunk of your spine embedded in rock for 10 million years, we can forgive some inaccuracies. But even we had to scratch our heads at today’s news that the fossilized primate Arrhinolemur scalabrinii –– “Scalbrini’s lemur without a nose” — is not a noseless lemur. Or a primate. Or a mammal. It is, in point of fact, a fish.

The fossil was identified as not being a lemur fifty years into its life — its second life, as a fossil — and researchers have thought a fish was a likely suspect for some time. Researchers at the University of Oregon and the Smithsonian Institute have placed the fish in its rightful genealogy: Genus Leporinus, family Anostomidae. So, good to have that settled. Can we safely put all our paleontologists back on the “cloning a wooly mammoth” tip now? Great.

We can now all go back to our normal lives which, if they’re anything like mine, involved almost a total lack of thinking about lemur fossils. I mean, yeah, occasionally there was some thinking, but mostly it’s just “What am I going to fix for dinner?” and “Where are my keys?” and “No, seriously, you guys, help me out, I can’t…nevermind. Got’em. They were in the vegetable crisper again.” Thankfully, our great grandkids will all get to look forward to the day, 100 years from now, when Arrhinolemur scalabrinii is discovered to actually be a fossil of two birds fighting over a sea urchin.