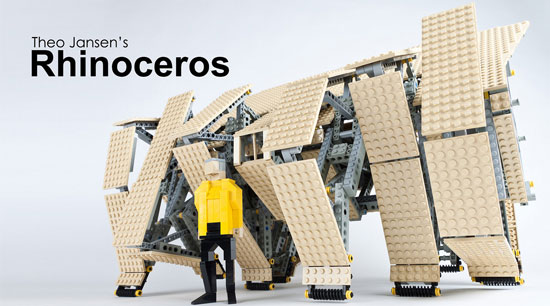 Artist Theo Jansen has been wowing and terrifying beachgoers with his kinetic sculptures he calls “strandbeests.” Massive and maddening in their complexity, their fluidity of motion is truly breathtaking. Even more amazing is that these sculptures are powered by the wind, or human power. Now, at long last, someone has found a way to translate one of Jansen’s designs into LEGO form, and it might even become an official set.

The LEGO Rhinoceros strandbeest is currently on the LEGO CUUSOO site, which sort of functions like Kickstarter. Once a design gets 10,000 votes, LEGO will review it and possibly make it available for sale as an official set. In the case of the strandbeest, it’s the work of a Dutch industrial designer using the screenname kvanb.

For his part, kvanb has worked with Jansen before — in fact, kvanb played a part in bringing the 3D printable versions of Jansen’s strandbeests to the public. Though Jansen did not work directly on the LEGO version, he’s given his blessing to kvanb.

The result is an astounding looking LEGO set that moves with the strange otherworldy grace as Jansen’s own creations. Like Jansen’s creations, the LEGO version has no motors, though kvanb notes that they could be added. There’s even a to-scale Jansen fig that comes with the set. Though the Rhinoceros is certainly complex, it does appear to be quite buildable. In fact, seeing it assembled out of technic pieces makes the whole thing seem far more understandable.

If this kind of thing excites you as much as it does me, sign up at CUUSOO and show your support. Let’s make this happen, people. 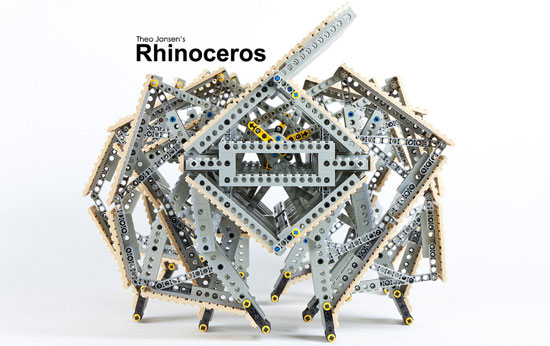 And here’s Jansen’s original Rhinoceros. As you can see, it’s a pretty spot-on recreation.

(LEGO CUUSOO via The Brothers Brick)