LEGO has an Ewok Village set coming out, and our lives won't be complete until we have one. 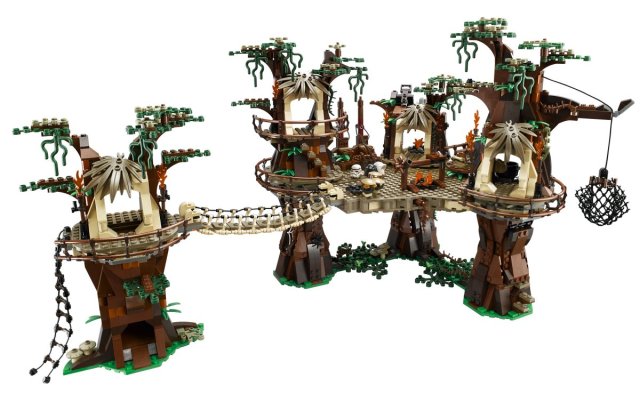 They’ve been accused of being the Jar-Jar Binks of their day, but I love the Ewoks. That’s why I’m so excited to hear about LEGO’s new offering — The Ewok Village. It’s a beautifully detailed 1,990 brick model complete with traps, hideouts, and even an elevating throne. The set even comes with 16 minifigs so you can relive all your favorite Endor scenes. I want this real bad. Real. Bad.

The set comes with five Ewoks, C3PO (For sitting on the throne, of course), Luke, Leia, Han, Chewie, two nameless rebels, a pair of Scout Troopers, and two Storm Troopers. The Ewoks included are Wicket, Teebo, Chief Chirpa, and Logray. They don’t name the fifth one, but I hope it’s that tiny baby Ewok, because even in LEGO form it would probably be the most adorable thing ever.

You can square these figures off against each other with the impressive arsenal included with the set. It comes with a lightsaber, three blasters, two rifles, two spears, a bow and crossbow, and also two staffs. You probably have to make that AT-ST head-smashing log contraption yourself.

The press release we got from LEGO also says this:

It’s probably safe to assume that’s just a leftover bit from an earlier release, since Ewoks are obviously years away from locomotive technology.

See the finer points of the Ewok Village set in this video by LEGO: