A 1:1 Scale LEGO X-Wing Should Be Able To Penetrate The Outer Defenses

LEGO unveiled a 1:1 scale replica of an X-Wing in Times Square to plug The Yoda Chronicles 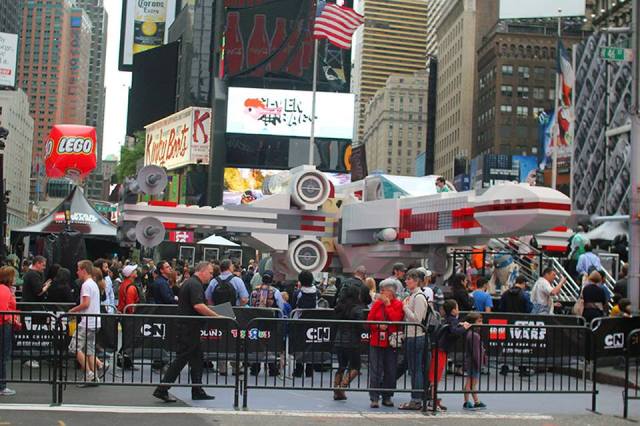 This Wednesday night, Cartoon Network is premiering the new animated series LEGO Star Wars: The Yoda Chronicles. To celebrate the new show LEGO unveiled a life-sized LEGO replica of an X-Wing fighter in Times Square. We’ll give you all the specs on this beauty in a second, but first — try to guess how many bricks it took to build. Go on. Guess.

The official count is 5,335,200 LEGO bricks to construct the 11-foot-tall, 43-foot-long X-Wing. It’s wingspan is an impressive 44 feet, and it took 32 master builders a combined total of 17,336 hours over the course of four months to complete. It weighs in at 45,980 pounds, and it’s even built to withstand not only it’s travel plans, but is also rated for seismic activity at LEGOLAND in California.

LEGO also released a new X-wing model kit — the LEGO Star Wars Red Five X-Wing Starfighter. They’re calling it the “ultimate collectible,” but after seeing this life-sized X-wing, it’s hard to impress anyone with your dinky little 1,500 brick toy. We’ll still probably buy it. It’s just going to be harder to impress anyone.

If LEGO really wants to get our attention, make a 1:1 scale replica of the Death Star trench and fly this thing through it.