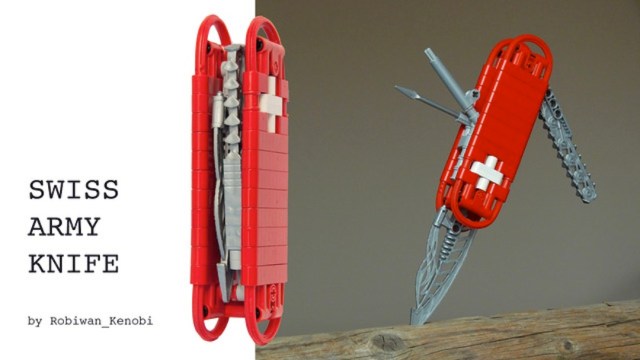 Using just LEGO and Bionicle pieces, builder Robiwan Kenobi has crafted the LEGO answer to any problem — the LEGO Swiss Army knife. The contraption features a LEGO blade, saw, toothpick and what looks to be a screwdriver arm, all of which fold in and out of the body, just like a real Swiss Army knife. The only thing it won’t do is actually cut anything, but come one — how often do you use a Swiss Army knife for that?

Robiwan (not his real name, probably) has been working on the knife since a 2010 prototype. Now that he’s satisfied with the final design, though, he’s lobbying LEGO to release the pieces he used in a proper kit so folks can build their own LEGO Swiss Army knives right out of a box. Because let’s face it, we just can’t all be this creative.

If you want to throw your voice behind the effort, check out the profile page for the project, and maybe one day, you can build a LEGO Swiss Army knife of your very own. Just, you know, don’t try to open any packages with it. That has the potential to be frustrating and embarrassing.

(via Technabob, image via Robiwan Kenobi)