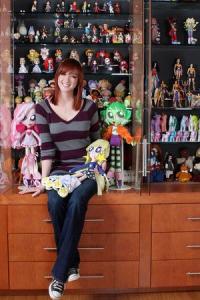 My specific dreams are still to make great entertainment for girls. I just don’t think there’s enough truly good stuff out there for them, but I also have kind of selfish reasons. When I think of something I want to say or an experience I want to share, my ideas are usually innately feminine because I’m female – and I refuse to believe that something being feminine by nature automatically means it isn’t worthwhile. If I can put the tiniest dent in the perception that “girly” equals “lame” or “for girls” equals “crappy,” I’ll be very satisfied. — Lauren Faust, creator of and consulting producer on My Little Pony: Friendship Is Magic, telling Equestria Daily about her approach to creating worthwhile entertainment for young girls (that is also entertaining for not-that-young girls, not-girls, and former U.S. Presidents).

(via This Is So Babies)