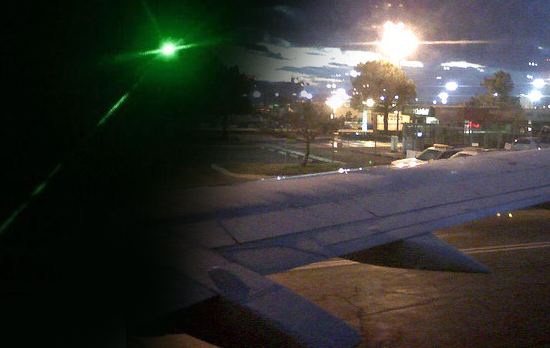 You might think we live in a world where people would realize that pointing lasers at aircraft is a bad idea. You might think that, but you’re wrong if you do. On March 29th, 2012, 19-year-old Adam Gardenhire was arrested for exactly this — pointing a green laser at a bunch of aircraft. He won’t be doing it for some time, though, since he’s earned himself 30 months in jail.

Gardenshire ended up pleading guilty to the act, which is a federal crime thanks in part to legislation from 2012. He apparently used a commercial-grade green laser to shine on a number of aircraft, but the initial report came from a private plane as it was preparing to land at Burbank airport. Let me reiterate: The pilot was prepping to land an airplane, and Gardenshire was smacking them in the face with a laser.

It doesn’t stop there, though. Gardenshire, in his infinite wisdom, also lit up a police helicopter that arrived on the scene to investigate. Let that sink in for a bit. Unlike the private plane, the helicopter pilot was wearing protective gear and therefore mostly unfazed, but it’s still something that comes off as excessively dumb.

This is only the second time a case of this kind has been prosecuted under the new legislation, but it’s unlikely to be the last. Everyone surely knows at least a handful of people that would potentially shine a laser pointer at an aircraft.

(Network World via Slashdot, The Verge, image via Incase)