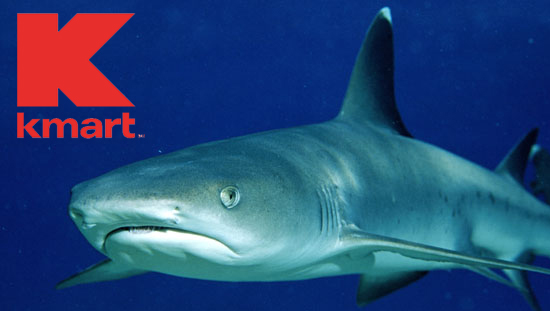 Because of Jaws and plenty of real-life attacks, we’re afraid of sharks. We should be; they’re top predators, they’ve got sharp teeth, and they can smell you from miles away. But we as a species don’t really wish them any harm, except for the ones that come after us — and really, a good punch to the face or a friendly neighborhood dolphin could do the trick. So it’s sad to learn of one dying because of something stupid people did. Specifically, a white-tipped shark died after being placed in an above-ground tank for a Kmart commercial in California.

It doesn’t help that the white-tipped shark is a “threatened species.” The shark died on March 6th, but it only got out after someone told PETA that Kmart insisted on the use of live sharks for the shoot:

A second shark? C’mon, Kmart. It’s jerky enough to do this once, especially when you don’t know why it happened.

Here’s what a Kmart representative had to say in defense of the company:

“We take this matter seriously and safety is always our paramount concern. We have been advised by our agency that the production company responsible for this shoot worked with professional animal handlers and a representative of the American Humane Association for the purpose of monitoring the shark’s welfare. We are saddened by this incident.”

Kmart is sad, you guys. And hey, pointing fingers is one way to deal with it.

The American Humane Association (AHA) was on the scene, because an animal was involved, and they’re the ones that tell us when no animals are harmed during the filming. You know the spot. Which they can’t do this time. Of course, PETA had something to say about the AHA, whom they hold responsible.

In a letter, Julia Gallucci, an animal behavior specialist for PETA, wrote:

“Sharks are sensitive animals who, in captivity, require a highly specialized and controlled environment. Given the delicate nature of this species, why would the AHA approve the transport and use of this animal?”

In their defense, senior adviser for the television unit of the AHA said the 60,000-gallon tank the shark was placed into was enough for the shark. She said, “We honestly don’t know why the animal died. It was not being mistreated. It was not being harmed.” Earlier, the sharked was said to be in good condition, then they noticed signs of distress. “As far as I know, it was immediately insisted upon that the animal receive specialized aquatic veterinarian care.”

So they gave the shark both oxygen and a shot of adrenaline in an attempt to stabilize it before transfer to an aquatic compound. But it died the same day and still no one knows why.

You know, Kmart, CGI is really good these days. Leave the real ones alone, jerks.

(via Business Insider, images courtesy of Wikipedia and robssundaystories.wordpress)