British Man Fired for Wrestling Shark While on Sick Leave 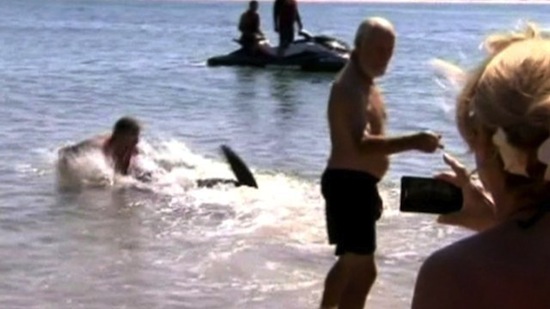 A charity organizer in Wales has been fired — or as our Glen Tickle might put it, “sacked” —  from his job with the Pant and Dowlais Boys and Girls Club after video surfaced of him wrestling a shark away from two children while he was on sick leave. That would seem reasonable, except that Paul Marshallsea was on leave for work-induced stress, a condition for which hanging out on the beach for a while is regularly prescribed, even if wrestling a shark while you’re there is, one assumes, generally not recommended.

The letter of dismissal received by Marshallsea and his wife — also a now former employee of the charity who was on sick leave — read in part:

Whilst unfit to work you were well enough to travel to Australia and, according to recent news footage of yourself in Queensland, you allegedly grabbed a shark by the tail and narrowly missed being bitten by quickly jumping out of the way.

To which we here at Geekosystem say: Dick move, Pant and Dowlais Boys and Girls Club. Real dick move. If Marshallsea had come down with the flu and still had to fight a bear to survive, would you have fired him for that, too? Yes, I know it’s an imperfect comparison, shut up.

I’m just gonna level here and say I don’t see what the big deal is. Unless your job specifically precludes wrestling sharks, it doesn’t seem like it should be a fireable offense. And I’m not talking about wrestling a shark away from helpless children, which is what was happening here. I’m talking about wrestling a shark, or any other animal, on your own time. What animal you wrestle when you’re not at work is between you and that animal, and no one else should say a word about it.

We also want to take a moment to wish best of luck to Mr. Marshallsea and his wife and wish them the best of luck in the job search, and also that they don’t have to fight any more sharks anytime soon.

(via Telegraph, image courtesy of BBC)