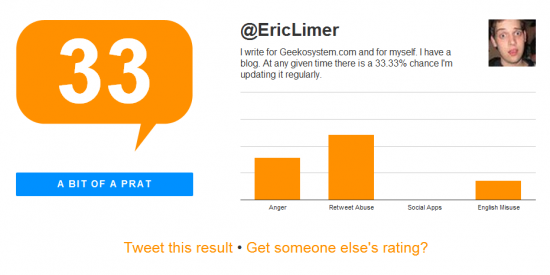 If you’re in an industry where social media matters (read: suddenly all of them) you may know about a thing called Klout. Using a series of, some might argue arbitrary, formulas and black magic, Klout assigns you a number that tells you exactly how important you are in your social networks. Klouchebag is its evil twin from a dark, sarcastic parallel universe. Klouchebag will assign you a number carefully calculated to tell you how much of an “asshat“ you are. Its words, not mine. As you can see above, I am a bit of a prat. It’s up to you to decide which score, on the whole, is worth more, or less.

The creator of Klouchebag, Tom Scott, is the Prat of the Year and he got the idea to start measuring everyone else’s asshattery after reading a Klout-friendly article from Wired that really rubbed him the wrong way. Like any prat of the year, he set out to even the playing field by slinging some mud.

Your asshattery, as determined by Klouchebag, is dependant on four things:

While there definitely is a certain air of high-horse-knock-offery going on here, Scott insists that it’s entirely in jest. In the site’s FAQ under the entry “It called me names,” Scott has this to say:

Sorry. Don’t take it personally. This is about as scientific as Klout’s own measurements — which is to say, it’s pretty much a crapshoot. You’re probably a lovely person. Although you might want to cut down on the swearing a bit.

Then again, he’s the prat of the year, so no one will blame you if you don’t take him at his word.

For the record: I’m a bit of a prat and Max is quite noisy, but James is mostly alright, and the official Geekosystem account is a nice person, somehow. Make of that what you will.