Makeout Pillows Made From CPR Dummy Mouths | The Mary Sue

This will really improve James Franco's relationship with his dakimakura, Kimiko-tan. 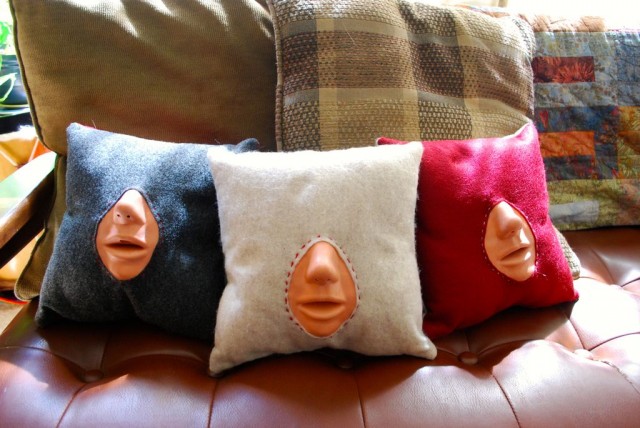 Want to creep out your valentine and also imply that they’re not a very good kisser in one fell swoop? Have we got the romantic homemade gift for you! All you need is some felt, a needle and thread, pillow stuffing, and a bunch of rubber removable mouths from discarded CPR dummys, and you’ll be able to make your partner’s dreams come true.

The creator of these delightfully terrifying mouth-pillows is emilygraceking of Instructables, who says

As I was taking out the garbage to my apartment complex trash last year, I saw two enormous suitcases on the ground next to the dumpster. The size was curious to me, so I snapped the latches and opened those bad boys up. The chest-opening song from Zelda played loudly in my head as I gazed upon the majesty within–each case contained a CPR dummy and a big bag of removable rubber dummy mouths. My eyes were wide as I took the hoard of face-bottoms from their cases…What magical creations could I make with such a weird find?

The mouths sat in a bin in my studio for awhile. They whispered to me as I worked in my studio. We are waiting, they said, and we are creepy. Don’t you want to get us out of your studio? After many months, the rubber lips exhaled the idea of make-out pillows. I’ve been avoiding the insistency of the mouths, but as we near closer to Valentine’s day I know the time has come.

What a coincidence! Insistency of the Mouths is the name of my apocalyptic synthpop collective. Anyway, I don’t know what it is about these pillows that creeps me out so much, but if I had to put words to it, I’d say that the way they’re sewn into the felt from behind makes me feel like there’s a dismembered head hidden in each of these pillows that’s just waiting until the dead of night to steal your eyeballs while you’re asleep and defenseless. Or maybe it’s just that kissing is gross. 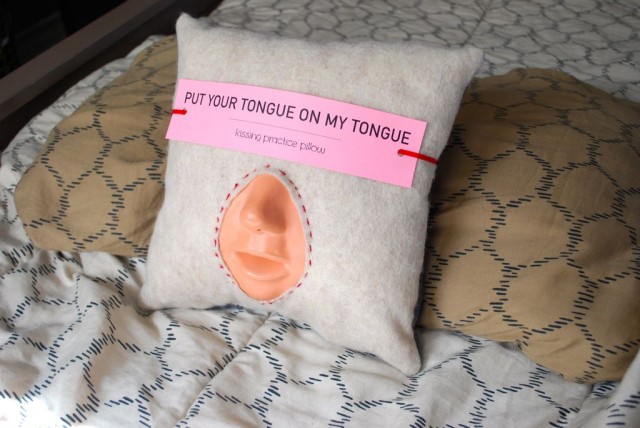 Unfortunately the prototype mouths are not for sale. If you still have a fierce and terrible desire to procure one for yourself, then head on over to the Instructables site for a full step-by-step guide, complete with work-in-progress images and tips on where to find the best plastic mouths.

(via The Daily Dot, images via Instructables)