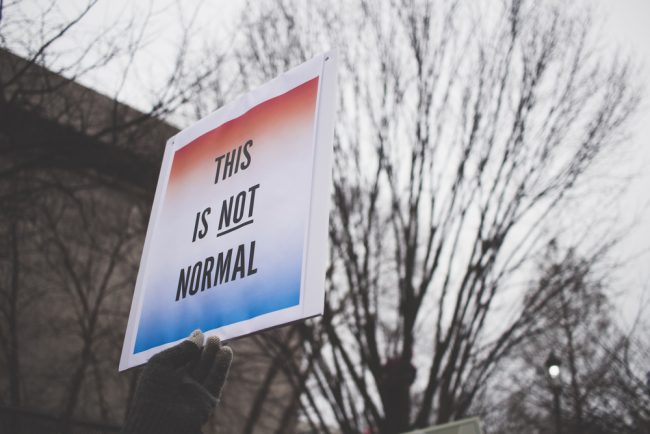 Kim Weaver, a Democratic candidate who was running in Iowa’s 4th congressional district, has announced her decision to drop out of the 2018 race against Republican Representative Steve King  – and her reasons should disturb anyone who cares about women’s participation in U.S. politics. While she was “most importantly” motivated by the need to take care of her sick mother, who lives outside the district, Weaver also explained in a Facebook post that she considered a number of factors, including “very alarming acts of intimidation, including death threats.”

“One consideration has been raised again by recent events at my home,” wrote Weaver. “Beginning during my 2016 campaign, I have received very alarming acts of intimidation, including death threats. While some may say enduring threats are just a part of running for office, my personal safety has increasingly become a concern.”

In addition, Weaver can’t afford to devote herself to the campaign full-time because of the Republicans’ murderous AHCA plans. “My personal health is an issue,” her post continued. “In order to sufficiently devote myself to the campaign, I would have to quit my job and shift to campaigning full-time. With recent legislation on health insurance, I must admit that the possibility of seeking a new job after the election exposes too much of a risk for me in not being able to secure health insurance.”

To me, the above paragraph suggests that Weaver may have a pre-existing condition, and her coverage would thereby be imperiled by the potential passage of the AHCA (which, let’s remember, would leave 23 million more people uninsured).

Ultimately, these two factors alone might not have pushed Weaver out of the campaign, had she not also had to worry about her mother. “Most importantly,” she wrote, “my mother lives in Des Moines and has been experiencing ongoing health issues. I feel that it’s necessary to be more available to support her. Considering this, along with the time and energy it takes to succeed as a candidate, I realize that I can’t fully commit to both.”

However, the death threats and insurance concerns remain disturbing. Women in the United States already face an incredibly uphill battle when running for political office. In 2017, women only make up 21% of the Senate and 19.1% of the House of Representatives, according to the Rutgers Center for American Women and Politics. Though Donald Trump’s election inspired more than 11,000 women to call Emily’s List about the possibility of running for office, we would still have to double the number of female representatives in our government in order to reach something even close to parity. That would be incredibly difficult to achieve in any circumstance – but it will be nearly impossible if conservative misogynists are so threatened by the prospect of women’s political enfranchisement that they bombard female candidates with repeated, credible threats.

In addition, when we talk about health care, we often focus on the lives lost – and it’s 100% right to do so, because that is the primary issue. The AHCA will kill people. Full-stop. However, one of the other effects of a predatory, cruel health insurance system is the loss to society, to innovation, and to our political system when workers are chained to their current jobs for fear of losing coverage. Would-be artists, entrepreneurs, and politicians are all lost to us when no one can afford the risk of undertaking these socially and scientifically beneficial roles, because they need the health insurance from their current job. We hold innovation and progress hostage when we don’t ensure access to health care, and Weaver’s case is just one example of this.

However, the fight against Steve King – whom you may remember from his national version of the heartbeat bill and unapologetic white supremacy – continues. Weaver promised that funds donated to her campaign “will be distributed within the district to continue to oppose Steve King,” and that she will continue to be part of the movement to elect more progressive candidates across Iowa.

(Via The Des Moines Register and Sioux City Journal; image via Shutterstock)