John Romita, Jr. Makes it Clear He Doesn’t Like Jim Carrey Because of Kick-Ass 2 Comments

How will they settle this feud? Pistols at dawn? 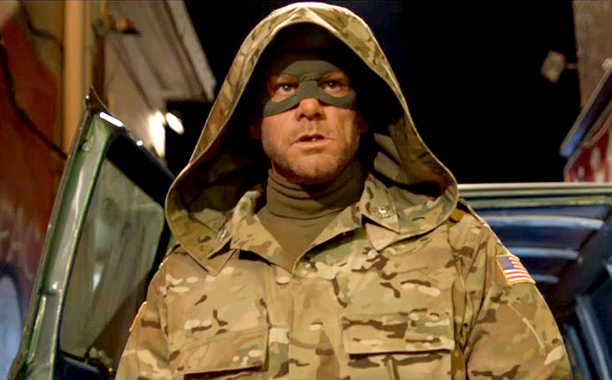 In a recent interview Kick-Ass’ John Romita Jr. let the world know exactly what he thinks about Jim Carrey and that time he pulled his support from Kick-Ass 2 for being too violent.

About a year ago, we were all gearing up for Kick-Ass 2 and getting excited for the new characters that would be introduced in the film. Readers of the comics were wondering how they were going to transition between the first and second movies given the differences between the first movie and book. And Jim Carrey was going to be in the movie!

A few months before the movie was released, Jim Carrey decided to withdraw his support for the movie. Since filming was already complete, he couldn’t back out entirely but he wanted to make his stance on gun control issues clear. I can see where he is coming from. The comics and movies are extremely violent and contain a lot of blood and gore.

This summer sees the Kick-Ass series wrapping up with the release of Kick-Ass 3 #8 this week. The final issue of the series packed quite the punch. Comic Book Resources interviewed creators Mark Millar and John Romita, Jr., and talked about everything from the ending of the book to, you guessed it, Jim Carrey. Millar glossed over Carey’s issues but Romita was very vocal on his thoughts regarding the matter.

As for Jim Carrey, I know I’ll never work with that bonehead again, so let me say this. I think Mark and I have talked about this before, but here’s a guy who could have capitalized on the character he played and played it toward his anti-gun stance. The character he played gave up weapons — gave up guns — and became a good guy. Anybody with three quarters of an education could have figured out how to fold that idea in with their anti-gun ideas. He’s not a smart enough guy to do that. He cashed his check and took his money, and then he went and pulled a bunch of crap on our film. I say “our film,” because a lot of people worked on that. He made people suffer that had jobs and needed every dime from this. I’m not talking about Mark and I. I’m talking about people in the offices and people behind the camera that worked their butts off for this. He took money out of their pockets, and he should be ashamed of himself. I’ve always wanted to say that, and I’ll stand on a chair and look him in the eye and tell him that’s what I think.

Well then. Tell us how you really feel. I can definitely see both sides of this argument. Romita has a point in that this very well could have been a huge publicity stunt for Carrey. Maybe we can give him the benefit of the doubt a little bit? I do respect Carrey for sticking with his opinion. But at the same time, the biggest theme of Kick-Ass is blood and violence. If he really was anti-gun or anti-violence, he should have said no to begin with. Either way, it’s all said and done now. They both have (hopefully) learned from their mistakes.