On Kesha, Victim Blaming, and Society’s Standards for the “Perfect” Survivor 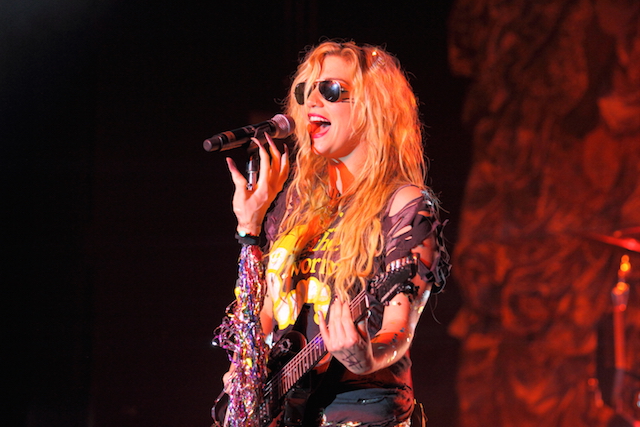 On Friday, we were incredibly disappointed to hear that a judge had denied Kesha’s request for a preliminary injunction, trapping her in a contract with Sony. Although in the judge’s words, Kesha doesn’t need to have “any interface” with producer Dr. Luke, who the singer alleges drugged and raped her, she still can’t record music outside of her contract with Sony and Dr. Luke’s label, Kemosabe Records. Kesha’s lawyers argued on Friday that forcing the singer to continue to work with Sony following the accusations is “setting her up to fail.”

Since Friday, many powerful women in the music industry have voiced their support for #FreeKesha, but scrutiny has also been placed—as it so often is for women who come forward with allegations of sexual assault—on Kesha’s character and how she handled her alleged abuse. In other words, she’s being asked to stack up next to society’s ideal of “the perfect victim,” an ideal that no one can possibly meet.

For instance, during her show yesterday, Wendy Williams said on the topic of Kesha and Dr. Luke’s legal battles,

Unfortunately business is business, and it sounds like it’s fair. If everybody complained because somebody allegedly sexually abused them…contracts would be broken all the time…Kesha’s no spring chicken. I mean she’s like, 30 years old?…So she wasn’t stupid 10 years ago and neither was her mother when the sexual abuse—alleged sexual abuse—started, why weren’t they rolling camera on it?

This woman needs to be taken off television. pic.twitter.com/VlACJVOS5h

Why wasn’t she rolling camera on the alleged abuse? I’m not going to dignify that question with much of a response, since it seems like Williams is unfamiliar with the details of Kesha’s claims—that she was unconscious during some of the alleged assaults, for example, or that Dr. Luke reportedly told her he “would shut her career down and otherwise destroy not only her life but her entire family’s lives as well” if she spoke up.

“Why didn’t she roll camera on her abuse?” makes no sense in the context of this specific case, but that’s not what’s most important here. What’s most important is that we recognize Williams’ line of questioning as an unreasonable demand, regardless of context. I’m sure there may have been instances where a victim could hypothetically have attempted to record their abuse but didn’t because they were in shock, traumatized, and terrified for their immediate physical safety. Asking why a survivor didn’t film their abuse isn’t just victim blaming; it denies the physical and mental trauma that’s concomitant with these kinds of crimes.

Of course, Williams isn’t alone in implying that Kesha isn’t measuring up to the “perfect victim” ideal. Dr. Luke himself spoke up about the case on Twitter yesterday (only several days after his legal team accused Kesha of conducting a “trial by Twitter”). In a string of 22 tweets that are at times unbelievably irrelevant (“I have […] a feminist mom who raised me right”) and occasionally infuriating (“Look what happened at UVA”), Dr. Luke denies the allegations against him and casts aspersions on Kesha’s character.

Mark Geragos (kesha’s attorney) represented Scott Peterson and Chris Brown. How can he pretend he cares about women’s rights?

He also referenced a deposition from 2011 in which Kesha denied under oath that he raped her:

Kesha’s lawyer has said of the deposition,

Dr. Luke repeatedly threatened that if she ever told anyone about these abusive incidents, he would destroy both Ms. Sebert and her entire family. … Ms. Sebert wholly believed that Dr. Luke had the power and money to carry out his threats; she therefore never dared talk about, let alone report, what Dr. Luke had done to her […] In every courtroom in every county, in battered women-type of cases, you have equivocal statements of ‘I don’t know.’ This is part and parcel of sexual abuse.

Obviously, Dr. Luke is within his rights to discuss some aspects of the case on Twitter, in the same way Kesha is (although someone should tell him that using his feminist mom as evidence that he’s not an abuser is pretty flipping gross). But it’s important that we think critically about the ways he’s attempting to discredit Kesha and the questions people like Wendy Williams have for her. It says a lot about our culture that Kesha’s lawyer’s stance on women’s issues, or the fact that Kesha didn’t film an assault, are both brought up as implicit criticism of the singer’s character, as if either of those facts make it impossible for her to be a victim. Regardless of how this story continues to unfold, or of what exactly happened between Luke and Kesha, the implications that Kesha isn’t behaving like a “real” or “perfect” survivor are inappropriate and very revealing.

Here’s the thing: If you are a survivor and you didn’t document or record your abuse, that’s not your fault. If you didn’t take a preventative measure at the time that influential people like to believe they would have taken, that’s not your fault. If you eventually wind up working with a lawyer who has also represented some of the scum of the Earth, that still doesn’t mean the abuse was your fault! Your lawyer’s gender politics, and your own, do not make you complicit in your abuse; neither would a past decision to deny the abuse for fear of repercussion.

And, if you are found wanting by society’s ridiculous standards for the “perfect victim,” that is most certainly not your fault, either. That’s on the rest of us.