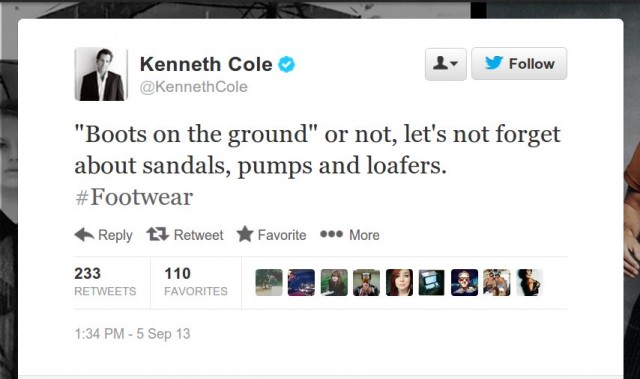 Exemplifying classic Troll behavior, Kenneth Cole has tweeted a grossly insensitive thing on Twitter to try to profit from the conflict in Syria. Gross! Even though this is transparent trolling, it’s still gross. That’s how gross it is. This isn’t how you sell things, jerk.

My laptop bag is a Kenneth Cole product, and it sucks. The zipper broke in the first week, and the straps on the clasps are falling apart.  This has nothing to do with Cole’s tweet, but since he’s obviously trolling and wants people to talk about his tweet then I’m at least going to talk about how shitty my laptop bag is.

Make no mistake. My laptop bag is terrible, and callously exploiting a serious situation in which people’s lives are at stake to sell shoes is a disgusting thing to do.

I screencapped the Tweet because it’s only a matter of time before it’s pulled and the empty apology is issued, but here’s the embedded version while it’s still live:

“Boots on the ground” or not, let’s not forget about sandals, pumps and loafers. #Footwear

Even after Cole apologizes, please remember that I still have a piece of shit laptop bag. Also Syria.