John McCain Caught Playing Poker on His Phone During Syria Hearing, Doesn’t Care He Got Caught

At least we don't have to listen to story of the hand he went out on. 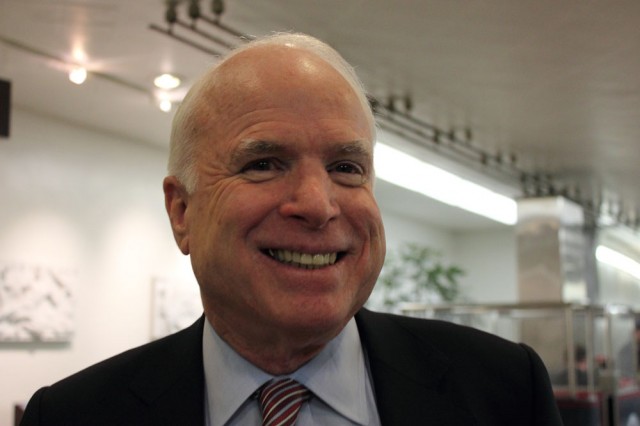 A Washington Post photographer spotted Senator John McCain (R-AZ) playing poker on his iPhone during Tuesday’s hearings on the situation in Syria, and he seems totally unremorseful about it saying the worst thing is that he lost the game.

After The Washington Post released the picture by photographer Melina Mara of McCain’s phone during the hearing, McCain tweeted:

McCain also laughed through Wolf Blitzer’s question about it during a CNN interview saying:

Well, as much as I like to always listen in rapt attention constantly with remarks of my colleagues over a three-and-a-half hour period, occasionally I get a LITTLE bored, and so I resorted–but the worst thing about it is, I lost thousands of dollars in this game.

So clearly, McCain doesn’t think this is a big deal, and look, it isn’t that big of a deal. The left will vilify him for it, and the right will vilify the left for vilifying him for it, but playing a game on your phone doesn’t require your full attention. People can multitask.

I goof off at work too, Senator McCain. I’ve checked my online chess games twice just while writing this post, because writing about you, I get a LITTLE bored. (Just like you!) The difference is that I’m a guy who writes about geek culture and occasionally about senators if they do dumb stuff that involves their iPhones, but you’re a United States Senator.

(The Washington Post via Mediaite, image via Medill DC)