Picking up the pieces -- the board game pieces. 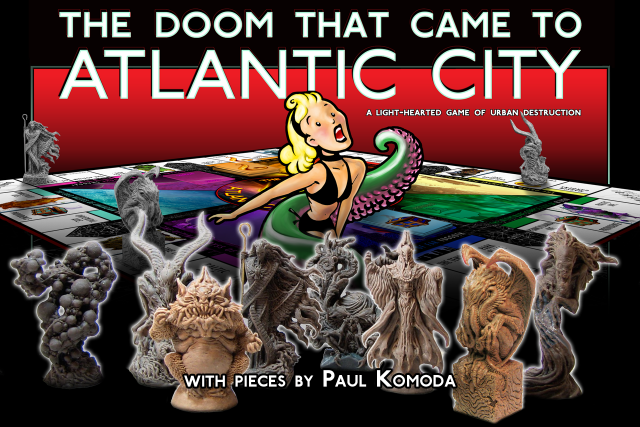 Two days ago, Erik Chevalier of the Forking Path announced that he has cancelled the Kickstarter to produce The Doom That Came To Atlantic City, a board game designed by Lee Moyer and Keith Baker, which is to say, me. When Lee and I first heard this news from Erik, it came as a shock. We’ve been working on this game for over a decade. In 2011 we had it ready to go to the printer with Z-Man Games, until a change in ownership dropped it from production. Based on the information we’d been receiving from the Forking Path we believed that the game was in production. It’s a personal and financial blow to both of us, but what concerns Lee and I is that people who believed in our work and put their faith in this Kickstarter have been let down.

[In case you missed what happened, you probably want to read this post first. – Ed.]

First of all, I would like to make one thing crystal clear. Lee Moyer and Keith Baker are not part of the Forking Path. Neither one of us received any of the funds raised by the Kickstarter or presales. I haven’t received any form of payment for this game. Lee and I were not involved in the decisions that brought about the end of this project, and we were misinformed about its progress and the state of the game.

As a designer, I want the ideas I come up with to bring people joy — not frustration, disappointment and anger. Once I sign a contract granting a company the rights to produce one of my games, I am putting my faith in that company and trusting that it will carry out production and delivery in a professional and ethical manner. I’ve worked with Atlas Games, Wizards of the Coast, Steve Jackson Games, Goodman Games, Green Ronin, Pelgrane Press, and many more, and I’ve never been let down until now. Lee and I don’t know exactly how the money was spent, why the backers were misled, what challenges were faced or what drove the decisions that led to the cancellation of the game. Not only did we not make any money from the game, we have actually lost money; as soon as we learned the true state of affairs, we engaged a lawyer to compel The Forking Path to come forward to the backers and to honor its pledge to issue refunds.

With that said, all that really matters to Lee and I is that our idea has led to frustration and anger instead of bringing happiness. We can’t change the past. We can’t produce the game as presented in the Kickstarter on our own. But under the terms of the contract the rights to the art and design are back in our hands, and we can at least share those. Lee and I will be producing a print-and-play version of the game as quickly as possible, and getting that to backers at no cost. You’ll have to use your own cardstock and paper, and we can’t produce the amazing miniatures sculpted by Paul Komoda. But we can share our ideas and our work, and we hope that you will enjoy it.

This is not the end of the road we thought we were on. Neither Lee nor I know how things reached this point, and when I look at the images from the manufacturer that show so clearly that the game could have been made, it breaks my heart. Lee and I will do our best to get you the game in print-and-play form as soon as possible. It’s not what we expected or planned on, but we at least hope that you will finally be able to get some enjoyment from the game we’ve worked on for all these years.

Keith Baker is a game designer and fantasy novel author. Perhaps best known for creating the Dungeons & Dragons campaign setting of Eberron for Wizards of the Coast, he is one of two designers behind The Doom That Came To Atlantic City!

This post appeared in its original form here, and has been republished with the author’s approval.