I'm trying to come up with a way to make this funny, but mostly I'm just glad they know they messed up. 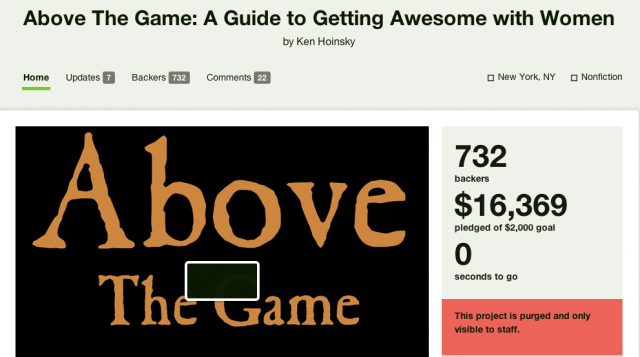 Have you ever wondered what Kickstarter might do if a morally reprehensible project slipped through the cracks and gets funded to completion before anyone noticed? Well, now you know: They can’t really do much of anything. So after being alerted to some very gross excerpts from an already funded “seduction guide” project, they decided to apologize profusely and donate a whole lot to charity to make everyone feel better. Of course, this is the Internet, so no one feels better and nothing is ever good enough.

As our sister site The Mary Sue pointed out when allegations against the “Above the Game” Kickstarter campaign were first levied, the project seemed to be fairly harmless at first — that is, until blogger Casey Malone pointed out some of the really creepy advice given in a few of the book’s excerpts, much of which explicitly directs its readers to deliberately ignore personal boundaries and “force” women to reject their advances. Yeah, dudes, sorry to have to be the one to tell you this, but that’s sexual harassment. And let me tell you from experience, it’s not fun being on the receiving end of that kind of behavior. Like, at all.

In light of this criticism, Kickstarter released a statement this morning saying that although they were unable to cancel the project in time and can not take the money back from its creator, they will be donating $25,000 to RAINN, an organization that counsels and protects victims of sexual abuse, in order to “combat exactly the sort of problems” that the guide might create.

They’ve also announced a change in their policy that prohibits “seduction guides” entirely — which might be overkill as it could very well prevent some well-intentioned, non-creepy dating advice materials from getting funded, but as a private company, Kickstarter is well within its rights to make the policies they want on this sort of thing, and if they want to err on the side of caution, that’s their prerogative.

Kickstarter has removed the offending page, saying that it “has no place” on their site, but they’ve provided a cached link to the original project for transparency’s sake.

The original creator of the project has responded to the criticism as well, claiming that the offensive excerpts were “taken out of context.”