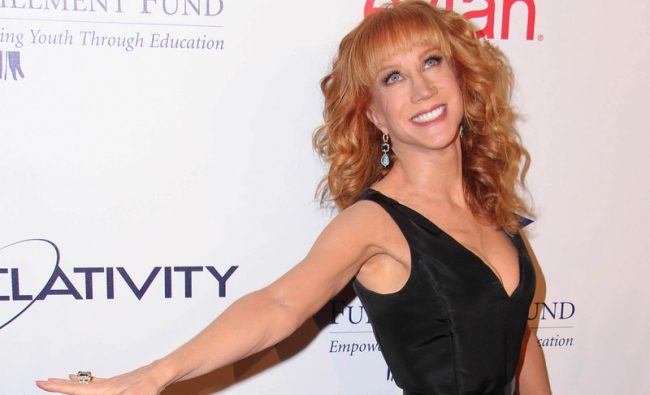 Tuesday afternoon, TMZ published a photo featuring Kathy Griffin holding a replica of Donald Trump’s head, covered in fake blood. By Tuesday evening, she was apologizing, which begs the question: HOW DID SHE NOT SEE THAT COMING?

After tweeting the image out herself, saying she captioned it “there was blood coming out of his eyes, blood coming out of his…wherever,” she posted a video apology. “I sincerely apologize,” she said. “I am just now seeing the reaction of these images. I’m a comic. I crossed the line. I move the line, then I cross it. I went way too far. The image is too disturbing. I understand how it offends people. It wasn’t funny. I get it.”

I feel confident in assuming that most of us look at the photograph and feel some degree of horror, or at the very least, disapproving exhaustion. So why is it that so many people are using Griffin’s picture as a representation of the “left’s” values? Donald Trump Jr. tweeted that “this is the left today,” ignoring the mountain of tweets from liberals, famous and otherwise, (including Chelsea Clinton, whom much of the right has, at other times, declared a figurehead for all liberals) condemning the photograph. Vice ran a piece putting the picture in the same category as Meryl Streep’s fantastic, eloquent Golden Globes speech as just another attempt at ineffective “Hollywood activism.” Even if you didn’t find Streep’s speech effective, in what world should it be placed next to Kathy Griffin holding a decapitated head?

Let’s make this clear: Kathy Griffin does not represent liberals. Bad art is not a liberal value. Acts of violence are not part of the Democratic party platform. Kathy Griffin’s photo shoot was in poor taste and is not indicative of how “the left” approaches anything.

Guess what? You can think Kathy Griffin was out of line AND think Trump is a hypocritical idiot. Try it. I’m doing it right now.

The only type of person this should reflect on is bad, thoughtless artists. Which is exactly who made this.

In an interview yesterday, pre-Griffin’s apology, the photographer, Tyler Shields made it clear that he and Griffin were trying to “get political” but didn’t actually have a clear message. He tried to paint the concept as totally spontaneously inspired, saying, “it was one of those things where we didn’t know exactly what we were gonna do until we got there.” When asked where he got the prop on such short notice, though, he clarified that they’d come up with the idea prior to the shoot, but didn’t officially decide they were doing it until that day.

So why this image specifically? “A few different things,” he says. “Obviously, there’s the freedom of speech thing, which is great. It’s such a timely image. We see millions of visuals every day and to make something that really stands out is very difficult now. I think that this has the potential to make people stop for a second and say, ‘What is that?'”

This isn’t what happens when Hollywood liberals get political. This is what happens when hack artists try to tap into political ideas they don’t actually care or know about. Griffin is vocally, vehemently anti-Trump, but Shields doesn’t seem to care one way or the other. “For me,” he says, “presidents are symbols. They’re symbols. They reflect some people’s ideals and they reflect the opposite of some other people’s ideals.”

This isn’t the first time Shields has tried to utilize pseudo-political shock value in his work without taking the time to actually form any sort of statement. In 2011, he photographed Glee’s Heather Morris with a glamorized domestic violence theme. (“Bruised-up Barbie” were his actual words.) In 2014, he fed a $100,000 purse to an alligator. Because … capitalism? I really don’t know, and I doubt he does either.

These aren’t the acts of the political left. They’re someone trying desperately to be edgy and relevant, and you can despise Trump and still recognize them such.