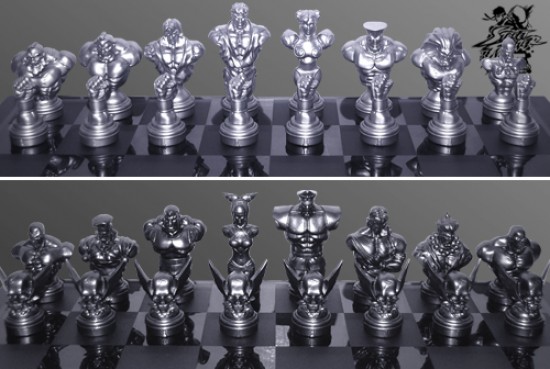 Unfortunately for you casual chess and Street Fighter fans, the limited edition set will burn a $299.95-sized hole in your previously holeless pocket. The set is quite nice, at least, as it features detailed silver and pewter-colored resin pieces, some standing as tall as 3.25 inches, which all store in their own cushy slot underneath the board. The glass chessboard is smoked and sandblasted, and measures in at 18 by 18 inches. The set comes in a black wood storage case, which opens and closes with a chrome latch.

The pieces include Ryu and M. Bison as kings, Chun-Li and Juri as queens, Ken, Guile, Balrog, and Vega as bishops, E. Honda, Blanka, Rolento, and Akuma as knights, Dhalsim, Zangief, Sagat, and Seth as rooks, and oddly, Ryu’s fist and a Shadaloo winged skull as pawns. Check out pictures of the set below.

The set is available for pre-order as we speak, and will be releasing sometime next month.