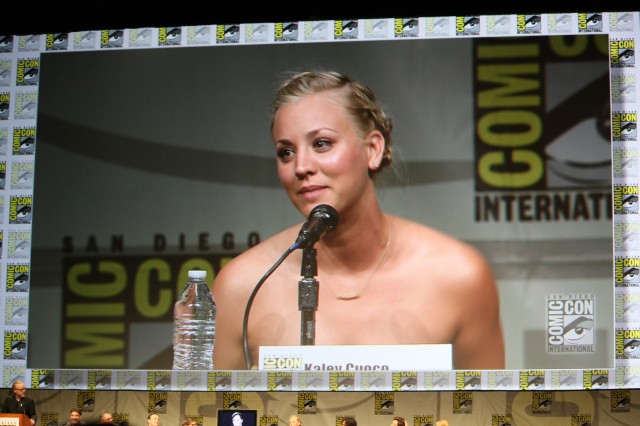 The Big Bang Theory‘s Kaley Cuoco-Sweeting is the cover story on the latest edition of RedBook, out next week, and she wants the world to know that she definitely isn’t a feminist because she likes to serve her husband. Sigh.

When asked if she considers herself a feminist, Cuoco-Sweeting replied, “Is it bad if I say no?”

Well, that depends – does she actually know the definition of feminism and disagree with it? If she’d answered yes to that, we’d still be disappointed but respect her decision. But here’s what she went on to say,

It’s not really something I think about. Things are different now, and I know a lot of the work that paved the way for women happened before I was around… I was never that feminist girl demanding equality, but maybe that’s because I’ve never really faced inequality.

Cuoco-Sweeting went on to say she isn’t a feminist because she cooks for her husband five nights a week, and that it makes her feel like a housewife. “I love that. I know it sounds old-fashioned, but I like the idea of women taking care of their men. I’m so in control of my work that I like coming home and serving him.”

Let me preface this by saying there’s absolutely nothing wrong with wanting the role Cuoco-Sweeting has for herself. She’s happy, and that’s great! But what I take issue with is misunderstanding that she’s free to make that choice, she you can have her acting job and then come home to be a housewife, because of feminism.

The most tragic thing about this interview is not that Cuoco-Sweeting personally doesn’t identify as a feminist (though that is also inarguably tragic in my mind), but that her words reflect the views of countless other men and women who believe the time for feminism is over, or that being a feminist means you also have to be a man-hating lesbian. The fact of the matter is, feminism fights for equality for all genders, and (at its very best), intersectional feminism fights for equality for all races, classes, ethnicities, sexualities, abilities, and more. If you say you are not a feminist, you are saying you don’t believe you think all women and men (and anyone who falls outside of that gender binary) deserve to be treated equally.

Cuoco-Sweeting is also expressing a couple of other popular problematic ideas about feminism here. By insinuating the need for feminism lies in the past, that all the “hard work” has already been done by women over the last century, she’s neglecting to notice all the ways in which women still suffer from inequality. Though she’s self-aware enough to recognize that this might be because she doesn’t suffer from any massive inequality herself, I’m willing to argue that this might be untrue. More to the point, we’d be hard-pressed to believe she never experienced inequality in her entire life. It’s more likely she just didn’t realize it because of what society and the media have taught us to accept as “normal.”

For example, working in the entertainment industry, Cuoco-Sweeting has to hold herself to specific standards of beauty that her male co-stars on The Big Bang Theory don’t. Also, as a woman in Hollywood (or in any job market), Cuoco-Sweeting has a statistically high chance of making far less money than her male co-stars over the course of her career. And outside of Cuoco-Sweeting’s immediate circumstances, her statement also ignores the fact that women across the globe suffer in horrible circumstances; that queer or Black or trans or differently-abled women live with far less privilege than she does; that feminism’s work is, in actuality, far from over.

Cuoco-Sweeting also fails to realize that feminists don’t want her to be ashamed of wanting to take care of her husband; that’s another one of those “popular problematic ideas.” Feminists want women to be able to do whatever they want, whenever they want it, in whichever way they choose. The reason Cuoco-Sweeting is able to hold down a million-dollar-an-episode job as well as cook for her husband five nights a week is thanks to feminism, but good feminism doesn’t look down on women who just want one thing or the other. Being a feminist means you get to choose to live however you want, and to also want that privilege for every woman.

It’s terribly sad to me that Cuoco-Sweeting has such a huge audience of impressionable girls (current episodes of The Big Bang Theory draw in approximately twenty million viewers per episode and more if you count those who pirate it), and chooses to make this her statement about feminism, obviously before educating herself about the subject. It is by no means her obligation to be a role model to young women, but she is in the public eye, and there’s no doubt that girls look up to her and what she says.

To compound this unfortunateness, Cuoco-Sweeting already plays a character on television that audiences are meant to laugh at because she’s “shallow” and “dumb” and “normal.” Feminism means you can be a waitress while trying to become an actress in LA and not like nerd things and everyone has to be okay with that. Maybe that’s something we could all do well to remember.

(via E!, image via Thibault)