Apparently The Script For Justice League Sucks. Now What? | The Mary Sue 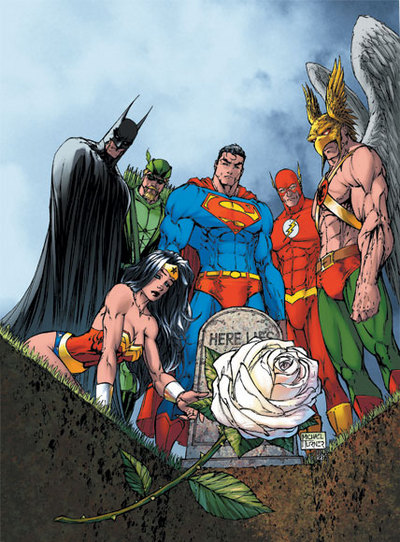 We knew it wouldn’t be that easy.

We’ve got nothing official to go on but Badass Digest is suggesting Warner Bros. has trashed the script for Justice League, due in theaters in 2015. Will Beall, writer for Castle and the low-grossing Gangster Squad, was the one with the weight on his shoulders and if the reports are true, he’s failed. BD writes:

I’ve now heard from multiple sources that the Will Beall script for Justice League has been scrapped. The story from each source is the same: it’s terrible. Some sources seem to think the whole movie is going to fall apart and never happen, while some believe that Warner Bros will keep moving forward, unwilling to lose the superhero arms race.

Beall’s script supposedly includes Darkseid and a heavy cosmic threat. But the script has been half-baked from the beginning, with reports saying that heroes (beyond the core five of Batman, Superman, Wonder Woman, The Flash and Green Lantern) have been cut and added from the proceedings seemingly at studio executive will.

No sources named in the report, as per usual, but it’s a shame if the script isn’t working out. There’s tons of pressure to perform in the wake of The Avengers success plus, we heard previously Warner was waiting to see how Man of Steel performed before deciding how to move ahead with Justice League.

The only name that had seriously been thrown around for director of the film was Ben Affleck, who denied the rumor completely. However, Latino Review’s El Mayimbe must really  love the guy. He alleged on Twitter the actor was also meant to play Batman. “Fun and fabulous fanboy fact of the day: did ya know when Affleck was approached to direct Justice League they also wanted him to play Batman?”

Give me a break.

Anyway, 2015 is still a ways off but I’m of the mind Warner Bros. shouldn’t try to rush this project. And if the rumor of the script being bad is true then I’m glad they’re going to try something else.