Jurassic World’s Mother of a Problem | The Mary Sue

Jurassic World’s Mother of a Problem

The once-progressive franchise takes a big step back. 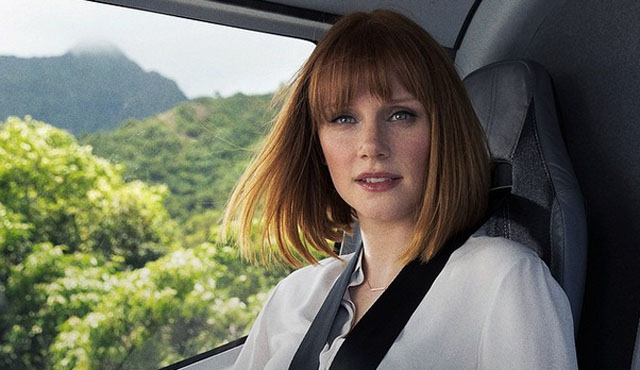 Remember a few weeks ago, when there was much debate as to whether or not Jurassic World was sexist? And if releasing a certain clip had simply been a miscalculation on the studio? Was that scene nothing more than screwball banter that was misconstrued outside of the larger context of the film? Well, the movie’s out and, unfortunately, it seems the scene isn’t what we were promised by the film’s director – and the movie does feel sexist. A lot more sexist than I expected.

Sure, Bryce Dallas Howard’s Claire occasionally gets a few scenes when she gets to kick a little ass; but it is almost always her mirroring Pratt’s character. Plus, those scenes of Howard are often punctuated with the “It’s a girl” wow moment, which is just annoying – like when she’s running in the dark in front of a T-Rex and we’re treated to a close-up of her stiletto heels. But that’s only at the end of the film; for the majority of Jurassic World, Claire is a punchline for the macho guys’ jokes, or the character who represents what’s really wrong with this park. Just like the animals hatched in a lab, with no family to provide them roots, she has forgotten her family for work, and chosen career over motherhood.

These parallels that movie makes with Claire’s personality and her lack of motherly instincts are why I had a big problem with the film. After initially being introduced to Hollywood’s most recent quintessential mom actress, Judy Greer (who deserves so much better than these bit parts), we meet her opposite: Claire. Greer is clearly presented as Howard’s “good sister,” sending her two children off to spend time with that screw-up, Claire. “Screwed up” because, hold on to your hats, people… she is putting her job ahead of family.

From what we see, this woman, with an entire park to run, has multiple responsibilities across multiple divisions, and gets very little assistance; but has still agreed to take these children as a favor for her sister during a divorce. I would tend to agree that if you commit to watching your sister’s kids, you should put the phone down; but it also seems like this weekend was pushed on her, rather than worked out with her schedule, and frankly Claire is dealing with this forced obligation as best she can. Nonetheless, Claire is presented very early on as a bad person of questionable morality because she has asked her assistant to watch the boys while she goes to work. I certainly didn’t share Chris Pratt’s look of shock and disgust when she makes the horrific reveal that she doesn’t know her own nephews’ ages! I couldn’t pass that test either, and I know a lot of good, sweet parents who have to reminded of their own children’s ages (and call each other by their sibling’s names from time to time).

Not being close to your nephews isn’t some kind of proof that you lack maternal instincts, the way this film suggests. Beyond that, Claire not having children, and declaring she doesn’t want children, also isn’t some sort of fatal personality flaw. But Jurassic World clearly sees it this way, believing the natural progression of women has them evolving into mothers, and those who don’t have that desire are somehow deficient of humanity. Despite claims to the contrary, motherhood does not equal inherent goodness, and not wanting to be a mother does not equal an inherent lack thereof for women. What about the many women who are unable to have children? Most importantly to the film – and this is where Jurassic World is really offensive – women who choose to put their careers first and/or foremost are not doing it as a coping mechanism for what is “really” lacking in their lives. I’m sure some are (as are many men), but many have a passion for their work which they want to put front and center, and that doesn’t make them less of a woman, or less a part of the world around her.

Unfortunately, we don’t see that kind of passion for her work, or even much of a personal life, for Claire the way we did in the other Jurassic films. We certainly saw passion for work from Ellie (Laura Dern) in the first film, and Sarah (Julianne Moore) in the second (and yes, even Tea Leoni’s underwritten character in Jurassic Park III is better developed than Claire). These weren’t women missing some fundamental part of their personality until they had children of their own, and they weren’t using their accomplishments to hide their feminine personalities. Ellie allowed herself to be vulnerable, while saving the day and voicing her opinions in a room full of guys, and while she was often the voice of reason on the island, she didn’t feel the need to berate. Claire often does seem to be using her power as a defense; but considering the number of men who work for her and still treat her with macho-disrespect, one can understand that. Top of that list is Pratt’s character, who speaks to Claire in a way that would get most men fired for sexual harassment.

If you somehow made it through all three films before Jurassic World, you know Ellie’s fate was to have children (though not with Sam Neil’s character, Grant, with whom she stays friends), leaves her work behind, and becomes stay at home mom – which isn’t some kind of betrayal of her character, either, because it is so clearly presented in Jurassic Park III as Ellie’s choice. And Ellie ultimately confirmed that Grant’s choice not to have children (a topic from the first film) was his choice, a choice he had the right to make and which no one suggests is a bigger flaw that he has to “solve.” And that is what is so different here, in the fourth and, ultimately, most sexist film in the franchise. While Ellie and Grant were “discussing” whether children would be a part of their future as an option, Claire is being told she want kids, that there is something wrong with her for not feeling that way herself.

Claire’s own sister tells her “one day she’ll settle down,” as if the life she has built is temporary, which might be the clearest piece of evidence that this movie was written by four men. I don’t know any sisters who are supposedly close (and at their age) who would say something that heartless, cruel, and thoughtless to her sibling, and I didn’t believe for a second that Howard’s Claire wouldn’t have taken offense and responded to her as being out of line. She doesn’t, and they don’t, because the filmmakers clearly believe this is her necessary evolution: to find her maternal side. As Marlow Stern wrote in his rather accurate review for The Daily Beast, the only character development we get in this movies is “a woman’s ‘evolution’ from an icy-cold, selfish corporate shill into a considerate wife and mother.” As if to say, don’t worry guys, that shrill boss-lady really just wants to find a sexist guy that will teach her how to behave, and awaken that biological clock. Sure, her life’s work is destroyed and hundreds dead… but she got a man who can give her that baby all women really want.

I suppose an entire paper could be written about how Jurassic Park deals with women and motherhood, considering all the dinosaurs are female, but only a man who can “tame” and control them – or that when left to her own devices, without family or man to “imprint on,” they become monsters. But this movie isn’t subtle enough warrant that much analysis.

To see Jill’s interpretation of the film, check out her review here.