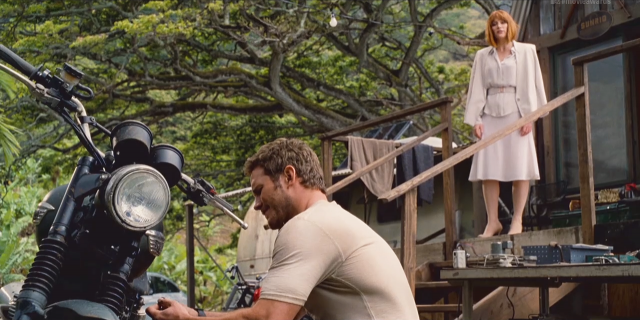 Jurassic World (our review here) may have great action, but its characters leave something to be desired. Up for specific discussion: why the hell did director Colin Trevorrow have his leading lady running for her life through the jungle in high heels?

In an interview with io9, Colin Trevorrow spoke to that query:

io9: And a lot of people remarked on the fact that Bryce Dallas Howard is running in heels. Why doesn’t she change into flats? She could put on boots!

Trevorrow: I know. I mean, look, I had that conversation with her so many times, and she insisted on wearing those heels. They meant something to her personally. She felt like, this is her talking, that those heels were her shield in a certain way as a woman. That’s just how she felt. She felt like surrendering the heels felt like surrendering the femininity of the character, even though women are — I don’t want to say forced to wear heels — but you’re expected to wear heels in certain environments.

And she felt that, even though the image of her running away in heels is… honestly, maybe I feel that I’m revealing my own ignorance in not having anticipated how that was going to become a subject of discussion, the way that it has. I was thinking about it solely for her comfort, and for logic reasons — the same thing that we’re talking about: ‘Can’t we find some other way? And she’s like, ‘No, no, I’m going to go for it.’

Because that’s something special. I mean, we are talking about it. And these movies, having something that’s iconic to themselves — for better or worse, that’s an image that people are going to remember. [Laughs] And I just hope that it’s recognized that I did bring it up on many occasions. [Laughs] But I support my actors! I want her to feel comfortable. And I want her to create a [character] that is truthful and true to her and how she feels in that character’s shoes, for lack of a better [word]. And that’s what made her feel like Claire.

Trevorrow: No, but knowing that character, I can buy that character would never take her heels off. She walks around in those heels every day. She’s already in that jungle wearing a white dress. I mean, I think to her it was just true to Claire, even if it’s not true to anybody else.

For her part, Howard spoke about the issue on the The Late Late Show with James Corden saying, “I did a lot of ankle exercises. I mean, honestly I trained for running in heels as if I was in the Olympics.” And then they made Chris Pratt run in heels.

Jungle heels aside, there are some other gender issues with the film, and io9 asked Trevorrow to respond to that as well.

io9: So what do you think about the criticisms of the gender roles in the movie? At times, Chris Pratt seems condescending towards Bryce Dallas Howard, and that’s mixed in with the romance subplot.

Trevorrow: I mean, he is condescending, at points. And that, to me, was designed to focus on our lead character, who is Bryce Dallas Howard. I mean, she’s the hero of the movie, and she’s the one who changes. She goes through a pretty massive arc, from being the head woman in charge and very corporatized, and very much governed by the needs of that corporation, to somebody who has kind of stripped herself of all the trappings, and become very at one with her inner animal — and the natural world. And [she’s] recognized that she saw these animals as assets, and as numbers, and that they are in fact living, breathing creatures. And I found it to be a movie about her finding her humanity. And that’s always how I saw it.

And honestly, I guess it’s a testament to my own ignorance of how things can be perceived — I never really saw it any other way. I definitely didn’t see it as a character who was learning to want to have children. That didn’t even occur to me. Because I don’t see her as going off and having children at the end of the movie — that doesn’t seem like that’s what she’s going to do. But I’ve heard that argument.

And look, it’s hard for me to debate any of those things, because it’s all about perception. It’s all about something lands with somebody. And I feel like everybody is right. However it lands with you, and however you perceive what we’re doing, you’re right. Because that’s how you saw it. So all I can say is, I hope that whatever people see in it, they know I very sincerely was looking to make a real badass action heroine who doesn’t surrender her femininity in the process of being a badass action heroine.

While I’m not enthralled with Trevorrow’s answers, at least he admitted 1.) the heels thing was a concern, just one that was brushed aside by Howard, and 2.) none of these other gender issues occurred to him, which is sadly the case for most Hollywood productions, but at least he admits his own ignorance.

It’s also nice to hear him say everyone may view the film differently. A lot of times when creators are criticized, they don’t understand how anyone could possibly see their work in any way but the way in which they intended, and that’s just not how the world works.