Wait… Jurassic Park 4 Actually Cleared a Milestone Towards Being an Actual Movie That Actually Happens? 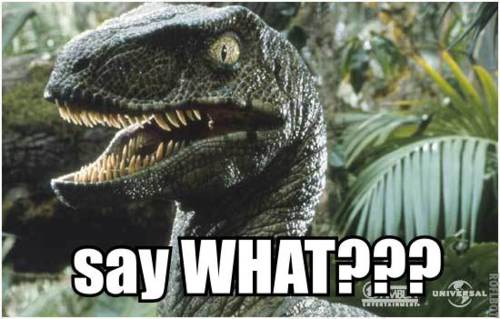 Got it? Good. It has nothing to do with the news about Jurassic Park IV, it’s just a pet peeve of mine that people don’t remember this.

A year ago, Steven Spielberg confirmed that he was “working on ideas” for Jurassic Park IV, which is pretty much the same as saying “we don’t have plans to make a movie right now.” But this morning, Deadline is reporting that Universal Studios has tapped Rick Jaffa and Amanda Silver to revitalize the long dormant Jurassic Park franchise, presumably because they realized that Battleship isn’t going to become a franchise any time soon. Who are these folks, you wonder, and what experience might they have with revitalizing long-dormant franchises with a story involving genetics, science, and evolution? Let me tell you about their last project: Rise of the Planet of the Apes.

So, that seems like a good choice to me, seeing as how using dinosaurs to kill Alzheimers is probably much to big of a stretch, and we’re just going to see them killing people. No brain, no brain disease, right?

Look, I’m going to be honest with you, it doesn’t really matter who makes Jurassic Park IV. I’m going to go see it, and probably enjoy it regardless. Once you’ve walked around wearing a sweatshirt like this, you’re kind of in for the long haul.

*That is, genetic modification other than removing the animals’ ability to produce the amino acid lysine, thus making them depending on lysine sources in their food, as a failed attempt to ensure that escaped animals would quickly starve.