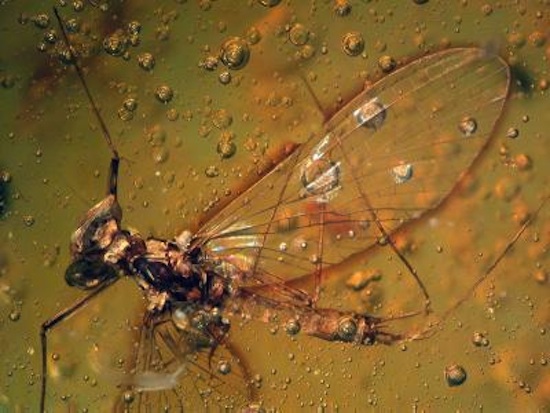 A piece of fossil amber may have offered researchers a glimpse at a never-before-seen insect behavior: A flightless bug known as a springtail that looks for all the world like it’s hitching a ride on the back of a mayfly. It’s not the first time that a fossilized springtail has been seen catching a lift — another piece of amber contains a springtail that seems to be riding atop an eight-legged harvestman — but it’s the first time researchers have found the ancient bugs catching a flight to a new destination.

This research, published online in the journal PLoS ONE calls up plenty of questions, like whether mayflies had chauffer relationships with other insects during prehistoric times, and even if they still might exhibit the behavior today. It’s never been observed in modern mayflies, but considering we can’t find anyone who has been actively looking for insects that are also used as public transit, it may be more that we haven’t  seen it because we haven’t been looking for it. On the other hand, this could be a kind of neat but ultimately misleading find that doesn’t really teach us anything.

All of this, however, ignores the really important question, which is whether the springtail paid for its travels in ass, gas, or grass. Because if we’re sure of one thing in this world, it’s that even 16 million years ago, nobody rode for free.