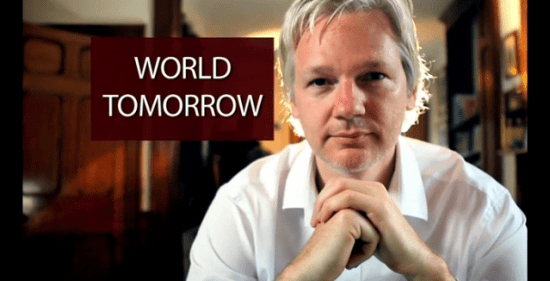 It seems like everyone gets a TV show nowadays, and Julian Assange is no exception. A recent announcement reveals that on April 17th, he’ll be airing his own live-to-tape TV show The World Tomorrow. The show will air on some Comcast and Time Warner Cable systems, and on RT, a Russian news network available in the U.S. with Dish Network. Also, of course, you can watch it on the web. We are talking about the guy behind WikiLeaks after all. Web access is kind of a given.

According to the WikiLeaks announcement, Assange has finished recording 12 episodes, all consisting of interviews edited down to 26 minutes, the first of which is with the middle-finger wielding M.I.A., oddly enough. According to Assange, the show will be characterized by its “frank and irreverent tone” and will showcase all kinds of guests including “politicians, revolutionaries, intellectuals, artists, and visionaries.”

It’s looking more and more likely that it might be literally impossible to silence Julian Assange. Here’s to hoping the content of his first televised outing is as compelling as the show’s existence.