Judy Blume’s Are You There, God? It’s Me, Margaret Will Finally Get a Movie Adaptation 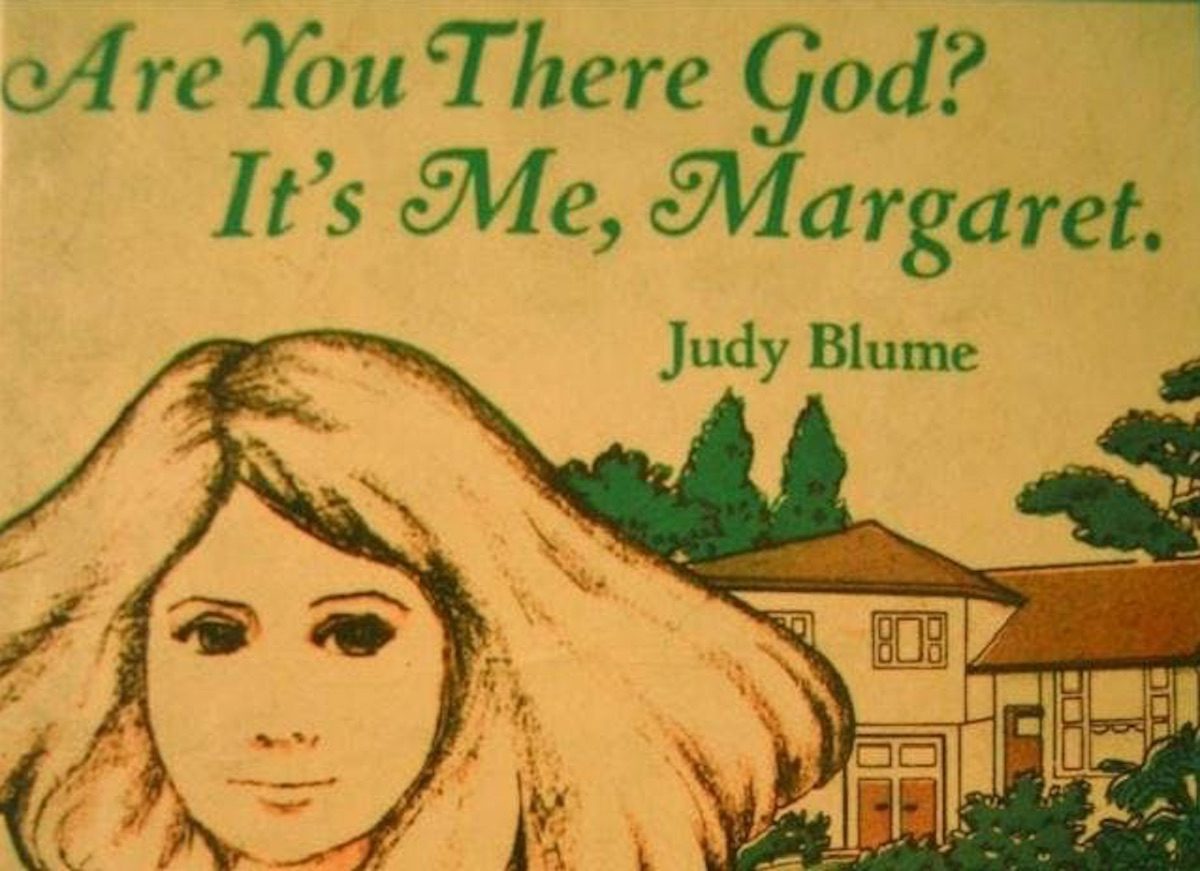 In the fifty years since Judy Blume published her wildly influential book Are You There God?, It’s Me, Margaret, the iconic author has resisted granting the screen rights to the story. Now, at 80 years old, Blume changed her mind, and has found what seems like the perfect team to bring Margaret to the wider world on the silver screen.

There are few more influential books in the canon of young adult literature—aimed particularly at young women—than Judy Blume’s Are You There, God? It’s Me, Margaret. For my generation, like the one before mine, and the one after, it was a must-read, and kids are still picking up the book today. When I saw this Dateline headline, my eyes went round, even twenty-five years after I read the book myself.

Are You There God? It’s Me, Margaret was published in 1970 as a YA novel, but it meant much more to a generation of preadolescent girls looking for answers and a sense they weren’t alone as childhood turned into a tumultuous something else. These were real problems they couldn’t discuss with anyone: when would they reach puberty and get their periods? Should they pad their bras, and what to do about the boys they were crushing on? Margaret is a sixth grader who moves from New York City to Farbrook, New Jersey. Raised by a religiously indifferent Christian mother and Jewish father, she prays to a God she imagines is watching over her.

The coming-of-age story has made millions of young people feel understood as their bodies undergo all sorts of changes and life begins to get a lot more complicated. Margaret is a guidebook through a twisty-turvy time of adolescence whose issues, especially where girls and their development are concerned, had never been addressed in such a frank and honest manner before Blume. It met with controversy and calls for censorship and bans over the decades, since anything straightforward about female sexuality is dangerous indeed, but now is regarded as a treasured classic.

Margaret made such an impact that many of us continue to carry it around in our memory and close to our hearts, ready to let loose a an excited monologue upon its mention. To celebrate Blume’s 80th birthday, I attended a gathering, “Judy Blumesday,” where actors read passages from her books in the author’s presence. Every mention of Margaret was greeted with the kinds of cheers and ecstatic applause normally reserved for a rock concert or a spiritual guru. Yes, there were chants of “I must, I must, I must increase my bust …”

After agreeing to consider granting the screen rights to her books, Blume received an impassioned email from Edge of Seventeen writer/director Kelly Fremon Craig. Craig enlisted the legendary producer James L. Brooks (As Good As It Gets, Big, Terms of Endearment) to help win over Blume, and their enthusiasm secured Are You There, God? It’s Me, Margaret coming to life as a movie.

Seeing Fremon Craig’s comments on the book leads me to believe that it has landed in the right hands.

“It is this right of passage for women and girls,” Fremon Craig told Deadline. “It’s rare for me to run into a woman or girl who hasn’t read it and every time I’ve mentioned it to a woman, they clutch their heart and let out this joyful gasp. There’s something so timely and full of truth and I remember for me that at that age, it felt like a life raft at a time when you’re lost and searching and unsure. This book comes along and tells you you’re not alone. Women remember where they were when they read it. I can’t think of another book you can say that about.”

Fremon Craig is at work at the adaptation along with Brooks and his Gracie Films production company. This paragraph from the Deadline article also warms the cockles of my cold dead heart:

Brooks, in meetings with Fremon Craig, Blume, and his fellow filmmakers including his daughter, finds himself for the first time outnumbered at the table by women, all of whom are personally invested by their own experiences reading the book for the first time and getting answers to questions they were afraid to ask their parents.

Outnumbered by women at the table hard at work adapting a book for young women! 2018 is saved.

OK next do Starring Sally J. Freedman As Herself, Forever, and Tiger Eyes, my other adored Blume YA books.

As an adult, my favorite Blume novel is Summer Sisters, which is a beachy, frothy, perfect soap opera set mostly in Martha’s Vineyard about the lifelong friendship between two women. I reread it every year to remind myself how to make fiction compelling, emotional, and more than anything, relatably truth-telling. This is what Judy Blume does best, and my fingers are crossed that her words can make the jump from page to screen and reach an even broader audience to impact for the rest of their days.

Time for another Summer Sisters reread. What’s your Blume book of choice?