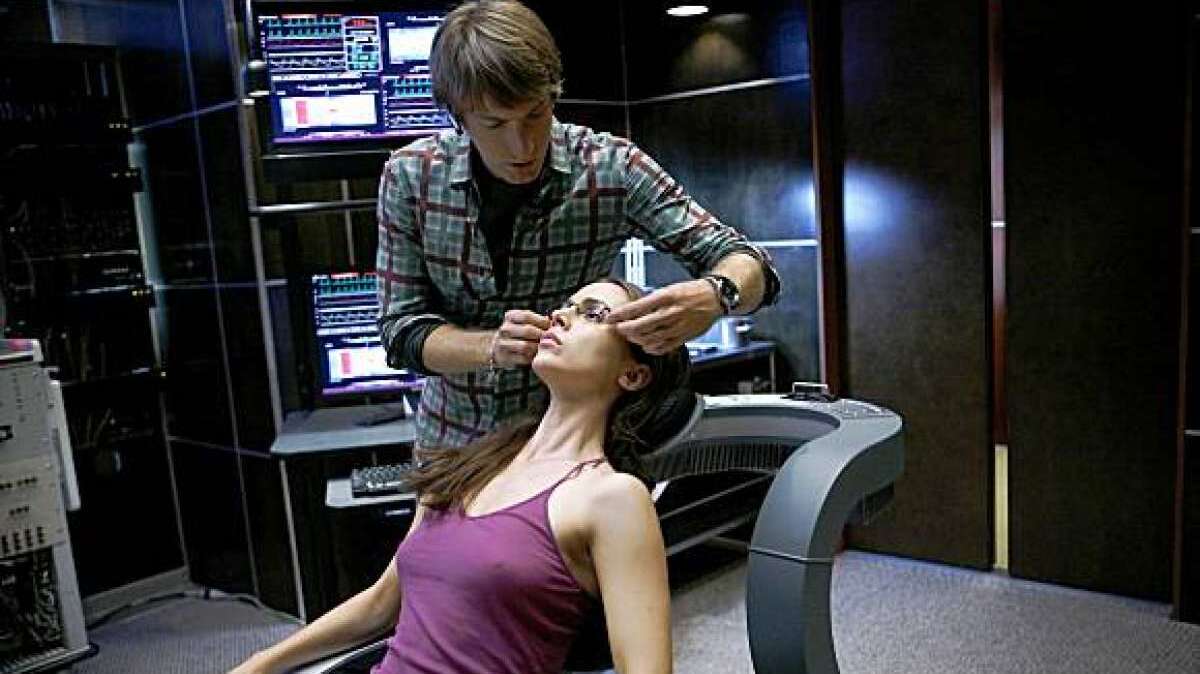 There is a chapter in the legend of Joss Whedon that we often overlook or forget, but it’s maybe the Rosetta stone of the current Whedon reckoning. After the conclusions of Firefly, Angel, and Buffy and following the highs of Doctor Horrible and Serenity, but before he took on The Avengers, Whedon reunited with Buffy‘s Faith, Eliza Dushku, to helm two seasons of a curious show called Dollhouse.

Debuting on Fox in February of 2009, the series never did well in the ratings and was canceled by the network in January of 2010. It was an interesting show in a lot of ways, especially in terms of what it had to say about technology and identity. But what we mostly missed in Dollhouse at the time that’s become far more clear as more and more allegations of Joss Whedon’s toxic behavior come to light is this: the series gave us an extremely good and deeply troubling idea of what Joss Whedon thought of women, their bodies, and their agency.

For those who haven’t watched or don’t recall much of the story, let’s explore the premise of Dollhouse. Across the world, there are secret facilities known as Dollhouses (run by a shadowy evil corporation, naturally) filled with people called “actives” or “dolls” who have had their minds wiped and who have new personalities and memories uploaded on command into their brains to serve wealthy and powerful clients. The dolls become the person the client needs, be it a sexual partner, a hostage negotiator, a criminal, or even a murder victim solving their own killing. It’s a concept that allowed for some very interesting “case of the week” episodes. The series explored ideas about self and immortality and technology and other themes that were picked up by other (better) shows like iZombie and Westworld.

But Dollhouse also relied on the abuse, exploitation, and objectification of women as its foundation that undercut the show with many pervasive and toxic ideas that went mainly unexplored.

As you might guess from the description, Dollhouse is an incredibly rapey concept. The actives, male and female, are pimped out to be perfect, willing partners for clients, most often for sex and used for sex by their handlers and the leadership of the Dollhouse. The idea is that they have consented to serve the Dollhouse for five years, but as we find out later in the series, the main character Echo (Dushku), as well as another active known as Sierra (Dichen Lachman), were both forcibly made into dolls. In Sierra’s case, she had her personality wiped and her life destroyed for the sole purpose of being raped by a man who was obsessed with her who she rejected. (She later murders him).

And that’s just the beginning. Not only are Sierra and Echo raped continuously as dolls, but Sierra is also raped by her handler in her childlike “tabula rasa” state. Another character, Mellie (Miracle Laurie) is revealed to be a doll known as November and after she’s released from the Dollhouse, she’s then recaptured forcefully, and yep, raped by clients as a doll.

It’s not just the endless rape and exploitation here that’s bad, it’s the casualness with which it is treated in Dollhouse. While what the Dollhouses and their evil parent corporation do is not seen as good per se, the struggle in the series is against the evil of the mind-wiping and personality imprinting technology, not the way it gets used to sexually exploit people. The rapes, like other violence on the show, are depicted as collateral damage. Since most of the rape is shown as non-violent, rather as sex without consent since the Dolls cannot consent, the creators of the show don’t seem to see it as a problem.

And this is where we get to the ways Dollhouse shows us what Joss Whedon, who built his reputation as a consummate feminist and champion of “kickass” women, really seems to think of women: as objects who are only as powerful as their ability to be violent. It wasn’t agency or her heart that makes Buffy a hero at the beginning, but as Robyn Bahr wrote for The Washington Post last weekend, it was her ability to hurt and be hurt. She was “the girl who can deal out punishment partly because she takes so much abuse, one who can absorb everything you throw at her, only to spout a retort while spitting blood and kicking you in the crotch.”

This idea of a woman who can take abuse and remain “powerful” (meaning able to be physically violent) is explored via River Tam in Firefly, where Whedon also made sure one of his lead women was a courtesan who the hero continually called a whore. But it was brought to its apex in Dollhouse where Echo became, in all senses, the ultimate toy for men and for Whedon: she could be anything and still be easy sexual prey, literally living to serve her masters, and at the same time that abuse and suffering made her “strong.” She was able to escape and undo the system only after she had been subjugated, raped, violated, and abused by countless people.

Now, of course, this is a drama and of course, heroes in all sorts of shows suffer and are hurt, but Whedon’s oeuvre reveals a particularly yucky obsession with young, beautiful, sexy women who can kick ass who are constantly victimized. As Whedon wrote on Buffy, it’s all about power, because making a woman powerful makes it even more satisfying when you get to have power over her.

Knowing as we do now from statements from everyone to Charisma Carpenter to Whedon’s own ex-wife and former co-workers, that idea of power and putting women in their place seems to have been a theme for Joss Whedon as a person. He liked to hurt people and command, especially women. He didn’t like them stepping out of their place or his ideas of how they should look, act, or be.

And then there’s the obsession with women’s bodies and reproductive lives. There’s incredibly icky stuff in Dollhouse about motherhood and children. Women go crazy because of their lady-parts and bodies, and motherhood is the be-all, end-all, it seems, for some characters. It’s clear from this and other shows and movies (like Natasha Romanoff in Age of Ultron) that Whedon can’t separate a woman as a person from her as a sexual object or a set of reproductive organs. That’s gross and reductive and extremely not feminist.

Loyal Whedon fan that I was in 2009, I watched every episode of Dollhouse and I liked a lot of it. It was smart and new and the cast was great. But looking back on it now, the issues are huge and apparent and the fact that so many of the yuckier elements of the very concept of Dollhouse were downplayed or ignored … well, it’s not surprising now as we look at Whedon and his work in a new light.

Empowerment is not about being able to kick ass. Feminism is not about equal opportunity abuse. Rape shouldn’t be a side effect of your sci-fi concept if you’re not ready to unpack and address that. As we’ve seen subsequently with Westworld and more, themes of personhood and consent and technology can be explored by genre in really interesting ways, but they don’t have to dehumanize and objectify their lead characters to do so, or they can at least address that.

We understand things better now. But we maybe should have known then that maybe Joss Whedon was telling us who he was all along: a man who seemed to view women on and off-screen as dolls for him to play with.