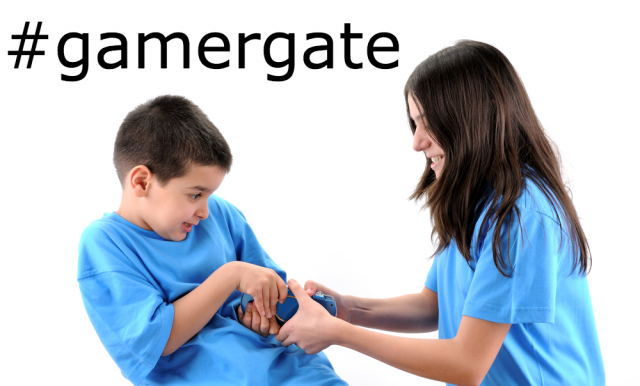 And GamerGate just keeps on churning. The last time we wrote about it, mainstream news organizations like CBS, PBS, and The New York Times were starting to get in on the action. One such publication is The Boston Globe, which ran a piece called “Gaming’s summer of rage” in late September. In it, author Jesse Singal identified the core of GamerGate as not concern over journalistic integrity, but instead “insecurity—profound insecurity—on the part of some male gamers reacting to their hobby of choice becoming more diverse and nuanced and, I dare say, emotionally intelligent.”

Surprisingly, GamerGate took this frank assessment of the hypocrisy of their movement to heart. Nahhhh, just messing with you. Singal was told that, to see what “the real GamerGate” is all about, he’d have to check out the subreddit KotakuInAction. Which he did. And then.

The takedown to end all takedowns. That’s reposted below—I tried to snip some of the best bits from it, but honestly, it’s all so on-point—but to get you in the mood, here’s a little aperitif from Joss Whedon and some other excellent internet people:

Many good people think #GamerGate is about journalism & artistic freedom. That’s like working at #KlanDayKare. The name means hate, guys.

.@assclit I'm not a gamer. The misogyny of "GamerGate" sickened me, which you could have learned with two clicks of research.

Take it away, Singal. This in response to his Boston Globe piece being linked-to on KiA as “another poorly-researched hit-piece” [sic]:

Uh huh. That’s why at this very moment three of the top six posts on KIA—the subreddit I was explicitly instructed to visit if I wanted to see the real GamerGate—are about Wu and Sarkeesian (oh, I’m sorry, LW1 and LW3 [or is Wu 2? I can’t keep track]) and social-justice warriors.

Me: I don’t think this is really about corruption as much as it’s about discomfort with feminism. After all, a lot of the heat seems to be aimed at small female devs/commentators of a feminist bent.

GamerGaters on Twitter: Not true! So unfair! Go to KIA!

[Goes to KIA. Suspicions appear to be mostly confirmed.]

This has happened over and over and over again (I also looked into the 8chan board and some other “approved” places). As a journalist trying to be fair-minded about this, you can’t fucking win. If I’m arguing with someone from the NRA or the NAACP or some other established group, I can point to actual quotes from the group’s leadership. With you guys, any bad thing that happens is, by definition, not the work of A True GamerGater. It’s one of the oldest logical fallacies in the book.

So what is GamerGate “really” about? I think this is the kinda question a philosopher of language would tear apart and scatter the remnants of to the wind, because it lacks any real referent. You guys refuse to appoint a leader or write up a platform or really do any of the things real-life, adult “movements” do. I’d argue that there isn’t really any such thing as GamerGate, because any given manifestation of it can be torn down as, again, No True GamerGate by anyone who disagrees with it. And who gets to decide what is and isn’t True GamerGate? You can’t say you want a decentralized, anonymous movement and then disown the ugly parts that inevitably pop up. Either everything is in, or everything is out.

Anyway, faced with this complete lack of clarity, all I or other journalists can do, then, is journalism: We ask the people in the movement what they stand for and then try to tease out what is real and what is PR. And every every every substantive conversation/forum/encounter I’ve had with folks from GamerGate has led me to believe that a large part of the reason for the group’s existence is discomfort with what its members see as the creeping and increasing influence of what you call social-justice warriors in the gaming world.

I’m not just making this up based on the occasional Tweet or forum post. After my HuffPost Live appearance, I was invited into a Google Hangout about GamerGate by Troy Rubert, aka @GhostLev. I accepted, and when I got in just about everyone who spoke openly talked about how mad they were that progressive politics and feminism were impinging on gaming, which they saw as an area they had enjoyed, free of politics, forever. They were extremely open about this. A day or so later, another GamerGater, @Smilomaniac, asked me to read a blog post he’d written about his involvement in the movement in which he explicitly IDs as anti-feminist, and says that while some people claim otherwise, he thinks GG is an anti-feminist movement.

I believe him; I think GamerGate is primarily about anger at progressive people who care about feminism and transgender rights and mental health and whatever else (I am not going to use your obnoxious social-justice warrior terminology anymore) getting involved in gaming, and by what you see as overly solicitous coverage of said individuals and their games. And that’s fine! It’s an opinion I happen to disagree with, but “at least it’s an ethos.”

But this is only going to be a real debate if you guys can cop to your real-life feelings and opinions. You should have a bit more courage and put your actual motives front and center. Instead, because some of you do have a certain degree of political savvy, as is evidenced whenever GamerGaters on 8chan and elsewhere try to rein in their more unhinged peers, you’ve decided to go the “journalism ethics” route.

Unfortunately, that sauce is incredibly weak. There was no Kotaku review of “Depression Quest,” and fair-minded journalists will see through that line of attack right away since ZQ was receiving hate for DQ long before her boyfriend posted that thing. Journalists donating to crowdfunding campaigns? I bet if you asked 100 journalists you’d get 100 different opinions on whether this should be inherently off-limits (personal take is that it isn’t, but that journalists should certainly disclose any projects to which they donate). Collusion to strike at the heart of the gamer identity? Conservatives have been arguing that liberal journalists unfairly collude forever—I was on the “Journolist” that people wrongly claimed was coordinating pro-Obama coverage when really what we were doing, like any other listserv of ideologically like-minded people, was arguing with ourselves over everything. What happened was Gamasutra ran a column, that column went viral, and a lot of people responded to it. That sort of cross-site collusion doesn’t happen the way you think it does. When everyone’s writing about the same thing, that’s because the thing in question is getting a lot of discussion, which LA’s column did.

You guys know as well as I do that a movement based on the stated goal of regaining gaming ground lost to feminists and (ugh) SJWs would not do very well from a PR perspective. But you’re in a bind, because the ethics charges are 1) 98% false; 2) complicated to follow for the layperson; and 3) pretty clearly a ruse given the underlying ideology of the folks pushing this line forward.

(Important side note: A lot of the people calling for “journalistic ethics” quite transparently don’t know anything about journalism — to say that sites should clearly label what is and isn’t opinion, for example, is just plain weird, because a) that distinction is less and less relevant and is mostly a relic of newspaper days; and b) it’s a basic reading-comprehension thing; anyone who reads on a daily basis can tell, pretty simply from various cues in the narrative, whether they’re reading a work of “straight” journalism [outdated, troublesome term], “pure” opinion [again, bleh], or some combination of the two [which is what a lot of games coverage is].) [Editor’s note: Emphasis mine, because booyah.]

So I’d make a call, one last time, for honesty: Stop pretending this is about stuff it isn’t. Acknowledge that you do not want SJWs in gaming, that you want games to just be about games. Again: I disagree, but at least then I (and other journalists! you do want coverage, don’t you?) could at least follow what the hell is going on. If your movement requires journalists to carefully parse 8chan chains to understand it, it gets an F- in the PR department.

You guys need to man and woman up and talk about what’s really on your mind, or stop whining about “biased” coverage and/or blaming it on non-existent conspiracies. And that’s my overlong two cents about your movement and why I’m having a lot of trouble taking it seriously.

(Edited right away to fix some stuff; more edits surely to come given that I wrote this quickly and in an under-caffeinated state. Feel free to snap a screenshot—I won’t be making any substantive changes.)

The comments are filled with a predictable number of screeds about how GamerGate really is about journalistic ethics, “my intellectualy dishonest friend.” But it’s Monday, and Monday doesn’t need my help being bad for the soul, so I’m not going to share any of that crap with you. At this point, you know what it says. I will, however, share my favorite comment, posted by glassspiider:

One thing about this that keeps causing little parts of my brain to die is the idea that the special snowflakes of the GG activist front claim to want objective reporting about video games. Doesn’t like 95% of VG “reporting” consist of reviews? I.e. critical reviews? Don’t those require the writer to take a position and/or state an opinion on the quality of the thing they’re reviewing? How do you make objective something that by its very definition is subjective?

It’s like people don’t even think about what they say befo— oh, wait.