Things That Jonathon Keats Has Done 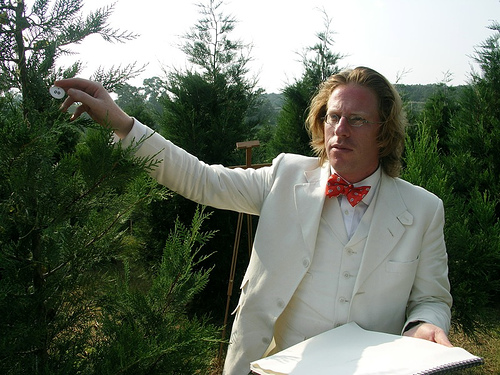 See, we were going to talk about this Wired article about conceptual artist Jonathon Keats getting some chunks of lunar and martian rock, smashing them up with a hammer and growing cactus and potatoes in them, because it contains all of the following language:

Like all astronauts, these potatoes and cacti are test pilots. And if you think of the greatest test pilots in history, from Chuck Yeager to Neil Armstrong, you find that they’re highly intelligent and also extremely dumb: Intelligent enough to navigate the unknown, and dumb enough to let themselves be launched in the first place. Plants also have these essential traits: The smarts to adapt to novel conditions and the stupidity not to run away…

Few people, in my experience, have ever revered a potato, let alone envied one. We tend to eat them, and of course the Irish cursed them during the Great Famine. But now here’s the chance for children to look up to potatoes as heroic, just as John Glenn and Buzz Aldrin were once role models…

Of course by colonialist standards, potatoes will have territorial claim to Mars since they’ve beat Homo sapiens, and what’s most hospitable to them may be to inhabit it without us around.

So, yeah, we were going to do a whole post just on that.  But then we went to Jonathon Keats’ Wikipedia page, and got lost for fifteen minutes.  And so, without further ado, we present a list of Things That Jonathon Keats Has Done.

We salute you, Jonathon Keats, for every thing you do is both crazier and saner than the last.