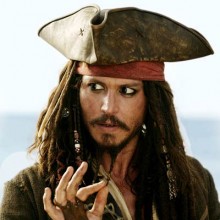 Today in publicity stunts that make us even bigger fans of Pirates of the Caribbean actor Johnny Depp — who was already awesome for being a talented winemaker, honorary Kentucky Colonel, and close personal friend of Hunter S. Thompson before the author’s death: When a nine-year old British schoolgirl named Beatrice Delap wrote “Captain Jack Sparrow” a letter asking him to come to her school to help the students stage a ‘mutiny’ against the teachers, Depp came to her classroom, dressed in full pirate gear.

Delap’s letter: “Captain Jack Sparrow, At Meridian Primary School, we are a bunch of budding young pirates and we were having a bit of trouble mutiny-ing against the teachers, and we’d love if you could come and help. –Beatrice Delap, aged nine, a budding pirate.”

She said that she was then asked by the star to make herself known from the assembled pupils once he arrived, and gave her a cuddle.

Beatrice marvelled: ‘He gave me a hug and he said, “Maybe we shouldn’t mutiny today ‘cos there are police outside monitoring me.”‘