Sherlock‘s Holmes & Watson Will Never Date, Say Showrunners: “This Is Not Going to Happen” 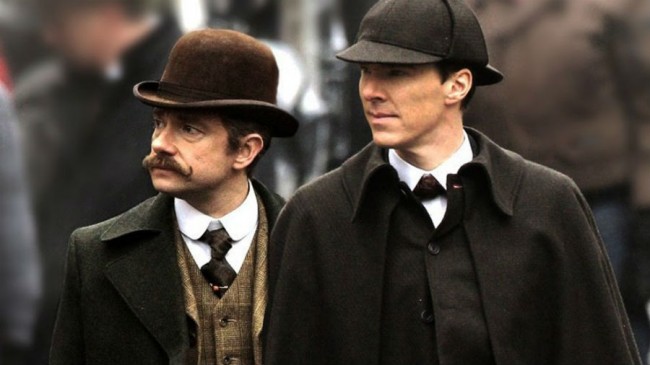 Whether you’re involved in the Sherlock fandom or not, it would be almost impossible for you to evade the question as to whether or not John Watson and Sherlock Holmes will end up in a romantic relationship together. After all, this is a question that fans have asked about these characters for decades, and it’s a question that has plagued many other adaptations of the series in the past.

However, in the case of Sherlock, it’s just not going to happen. The show’s creative team has been dumping cold water on the pairing for several years now, but in a recent interview on With An Accent, showrunners Steven Moffat and Mark Gatiss tackled the question directly and gave a firm nope.

Although Moffat recently said on a panel at San Diego Comic-Con 2016 that media could stand to see more diverse representations of sexuality, he clarifies in this interview that his comments were not intended to be taken as a confirmation that Sherlock‘s male leads would start dating any time soon.

Gatiss: [Sherlock] explicitly says he is not interested. Doesn’t mean he couldn’t be. Doesn’t mean there’s anything wrong with it. I’m a gay man. This is not an issue. But we’ve explicitly said this is not going to happen—there is no game plan—no matter how much we lie about other things, that this show is going to culminate in Martin [Freeman] and Benedict [Cumberbatch] going off into the sunset together. They are not going to do it. And if people want to write whatever they like and have a great time extrapolating that’s absolutely fine. But there is no hidden or exposed agenda. We’re not trying to fuck with people’s heads. Not trying to insult anybody or make any kind of issue out of it, there’s nothing there. It’s just our show and that’s what these characters are like. If people want to do that on websites absolutely fine. But there’s nothing there.

Fans reacted to this interview with such disbelief and disappointment that Gatiss had to clarify on Twitter that this was, indeed, a real interview and not fake. Later on in the interview, Moffat went on to clarify his comments at SDCC:

I also think in my case, I was talking about representation, as was Bryan, in quite a serious way. What they did was scale back that conversation and make it about something extremely silly. And that’s not helping anyone. I cared a lot about what I said on that panel. I meant it. And I don’t like it being reinterpreted as something else. [We’re] not telling anyone what to think. Mark isn’t saying other people can’t write that version of John and Sherlock getting together. We’re not. We’re not engaging in a clever conspiracy to write something under the radar, we’re just writing the show we’re writing.

Although I can understand that it would be frustrating to hear fans voice their feelings of betrayal in response to this, I do hope that Moffat and Gatiss and the rest of the creative team try to understand the sentiment behind those feelings. Again, the nature of the relationship between these two characters has been a question in fans’ minds across many adaptations over the years. At one point in the interview, Gatiss says in passing, “they’re our characters”—and of course that’s true of these particular interpretations of the characters, but technically, the characters belong to the Conan Doyle estate.

The Conan Doyle estate has already weighed in on this question in the past with a very firm no. When Robert Downey Jr. appeared as Holmes in the movie adaptations of the characters, he maybe-jokingly-maybe-not said that he saw Holmes as a “butch homosexual,” which inspired the US copyright owner for the Conan Doyle estate to respond: “I hope this is just an example of Mr Downey’s black sense of humour. It would be drastic, but I would withdraw permission for more films to be made if they feel that is a theme they wish to bring out in the future.” (The Conan Doyle estate has a history of being particularly litigious with regard to adaptations.)

What would the original author of the stories have wanted? Of course, we can’t ask Sir Arthur Conan Doyle this question directly, but reams of academic scholarship have been devoted to the nature of the relationship between Holmes and Watson. Bridgewater State University’s Rebecca McLaughlin makes the case for the pair’s platonic friendship in her paper “A Study in Sherlock,” writing: “In an era that would see the imprisonment of Oscar Wilde for homosexual activity, there was increased pressure for men to engage in homosocial bonds that did not support homosexuality. These stories tried to quell fears about men who relied on homosocial companionship, using Holmes and Watson as socially acceptable, even admirable, examples of male friends.”

McLaughlin’s research goes on to point out the ways that Sherlock has made this subtext into text and has implied the possibility of a romance between the pair. Since the characters exist in our modern world, where homosexuality is no longer illegal as it was in the Victorian era (but still not universally accepted), the question has to be addressed.

Plenty of other scholarly research on the pairing has argued that the original Sherlock Holmes character might have been asexual, which is an interpretation with which Sherlock star Benedict Cumberbatch agrees. There’s very little evidence to support the theory that Conan Doyle intended these characters to be homosexual at the time, however. But what we don’t know, and can never know, is whether or not Conan Doyle would have been opposed to a potential re-interpretation of the stories in which the characters are gay. After all, Sherlock (and many other adaptations) is obviously not a note-for-note recreation of the original stories; the characters are in a different time period, for one thing, but also they have many other personality and biographical differences. As another example, Elementary changes John Watson’s gender and race, and the Conan Doyle estate was fine with that. So why is it so unheard of to imagine changing any other aspect of these characters?

In their interview, Gatiss and Moffat seem accepting of the fact that regardless of their characters’ canonical sexual preferences, fans will continue to create alternative works that present other possibilities. They also emphasize that there’s nothing wrong with that, but Moffat’s use of the word “silly,” as well as his frustration at fans “trivializing” the issue, seems strange to me.

Holmes’ asexuality is probably what’s closest to canon based on what’s in the original short stories and books—and, by the way, he should be held up as a canonically asexual icon. But does that mean that it’s “silly” for fans to have an alternative interpretation of the character, or that those fans are somehow “trivializing” the character to have him date someone? (Oh, and by the way, many asexual people do still date people, and some even choose to engage in sexual activity.)

The most ironic part of this whole controversy, to me, is the ongoing implication that fans today are somehow more entitled than fans in the past, because the original fans of Conan Doyle’s stories were definitely entitled as all heck. When Sherlock Holmes died within the canon, Conan Doyle got pressured to bring the character back to life due to the huge backlash he experienced from his own fans. They sent angry letters and death threats, they picketed his home address (old-school doxing!), they “wore black armbands as if a real celebrity had died,” and according to one rumor, a lady even attacked him on the street with her umbrella. Now that is entitlement. Of course, it all worked, because the character did end up getting brought back to life.

That’s not the only time that Conan Doyle received death threats, either. He received more later in life, theorized to be due to his views about the importance of “female emancipation,” so he ended up getting a police escort. Again, not so different from how folks react towards creators today, is it? Hmm.

It makes sense that fans would feel so attached to Conan Doyle and his work, though, especially if you go back and read the original stories. The relationship between Holmes and Watson plays out like a tale-as-old-as-time romantic comedy. It starts with Watson feeling like Holmes is abrasive, although Watson can’t deny that the guy’s intelligent. Eventually, Watson grows to love Holmes (as a friend!), and the feeling is mutual. This type of dynamic has been recreated in stories over and over, both as a source for a platonic relationship or a non-platonic one. There’s a reason that it’s a classic.

Fans will probably not stop feeling “entitled” about these characters and feeling an intense personal connection to them any time soon. And I think Moffat and Gatiss probably know that, and they knew that when they signed up to do this show. The one-in-a-million relationship between Holmes and Watson has existed for so long and has meant so many different things to so many different fans.

I mean, obviously attacking a fiction creator on the street with your umbrella is taking it a bit too far. I think we can all agree not to do that, right? No death threats, no picketing people’s houses, and so on. But … wearing a black armband? I think that’s okay, actually. It’s a little melodramatic, sure, but it’s okay to care about the art that you love. And I don’t think creators should be unnerved or upset when they provoke this type of emotional reaction among their fans. There’s nothing “silly” about that, even if it may seem so at first. It’s just a sign that fans relate to your characters so much, that they can see themselves in their shoes—and maybe those fans are, themselves, not straight and want to see those characters representing them. That isn’t “silly” or “trivializing” at all.

(via The Daily Dot, image via Bago Games/Flickr)