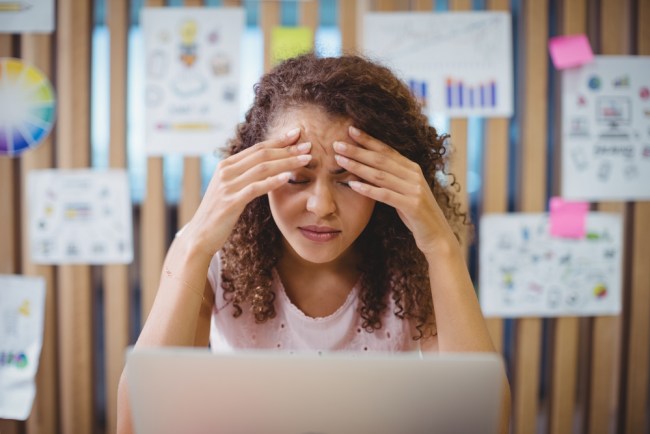 Science fiction author and all around Cool Guy John Scalzi has a new blog post that made me—and judging by reactions, a host of other readers—feel like we’re not alone in struggling to produce art in the Trump era.

Oh good it’s not just me. Jeez I feel a lot less alone all of a sudden.

There was a time after the election when I felt hollowed out by what had happened and imagined I might never write creatively again. I’m part of online writing communities and saw people echo similar sentiments there. How could we create when the world we knew seemed at an end? And unfortunately, after that first shock, nothing got better or approached “normal” again: every day in Trumpland feels like trying to walk on quicksand—quicksand in which terrible monsters lurk, popping their heads up with alarming frequency. I struggle to remember even a single day since Trump took office that was scandal or incident-free. For many of us, this has been the longest nine months of our lives.

I’m not trying to be mysterious about what it is about 2017 that is different. The answer is obvious: Trump is president, and he’s a peevish bigoted incompetent surrounded by the same, and he’s wreaking havoc on large stretches of the American experience, both in his own person and by the chaos he invites.

[…]  the Trump era is a different kind of awful. It is, bluntly, unremitting awfulness. The man has been in office for nine months at this point and there is rarely a week or month where things have not been historically crappy, a feculent stew of Trump’s shittiness as a human and as a president, his epically corrupt and immoral administration, and the rise of worse elements of America finally feeling free to say, hey, in fact, they do hate Jews and gays and brown people. Maybe other people can focus when Shitty America is large and in charge, but I’m finding it difficult to do.

And the rage, helplessness, and sadness many of us are experiencing doesn’t always translate into a counter-culture of protest art, either, which was a nice idea people tossed around right after the election. “This will be a great instigator for a new generation of angry songwriting,” a musician pal told me then. I wasn’t so sure. While I’m sure we’ll see—are already seeing—art in reaction and refutation of Trump, I know that I’m currently not in the mood to give him any more of my reduced energies. If I’m able to write creatively at all now, I want to write about people with magical powers, or people traveling through time, to a world that’s not our own. That’s not to say that politics won’t creep in—I think that all art absorbs the surroundings where it was born. But when I’m building a narrative, I want to be in a place of greater possibilities than now feels like.

the art appreciator in me is bummed that “GREAT art will come out of this!” chestnut was as misguided as it was tonedeaf.

Scalzi goes on to talk about the difficulty of “just unplugging” in this day in age—the news will reach you somehow regardless, and it’s important to remain engaged. “The world gets in anyway,” he writes on the concept of unplugging, “because the world is in worse shape and wants you to know.” Not to mention that the choice to “just unplug” (advice many of us receive when we report that we’re overwhelmed by the state of society) can be a privilege. Scalzi recognizes it as such in a time when threatened groups—women, minorities, the LGBTQIA community, immigrants—do not have the luxury of ignoring or switching off the Trump administration’s actions.

And then Scalzi makes an observation that I didn’t know I was waiting to read until I read it: things aren’t going to settle down or revert back, this is the new normal, and we need to rework our old creative processes to account for the realities of our new lives.

What 2017 has been doing for me is making me realize that I can’t do work in the same way I used to. It’s too hard to tune out what’s going on in the world, and because of it I have to make some changes — to my workflow, to my understanding of what’s a good writing day, and in allocating time to get work done. In effect, I have to learn how to change my swing in order to work effectively in this chaotic new environment. It’s taken me longer to figure this out than I would have liked; I’ve spent a lot of time this year trying to get make the old workflow function rather than reconfiguring my process to the new facts on the ground. Part of this was, simply, hoping things would settle down and get back to normal. But it’s October 2017 and it’s time to face the fact that, at least as far as my writing process goes, the old “normal” is gone.

He explains why this felt like the moment to raise the issue:

Why am I talking about this right now? Basically, because I know it’s not just me. I know a lot of writers have seen their process take a hit here in 2017. It’s hard to focus when the world is on fire, and with novelists in particular, I suspect that sometimes it’s hard to focus when you’ve got the suspicion that your fiction is almost frivolous in the context of what’s going on right now. Well, and maybe it is. But, speaking as someone who spent an hour retweeting pet pictures today to break up the horror of mass shooting news in people’s tweetstreams, sometimes frivolity helps. And for all writers (and probably other creative people as well), knowing that you’re not the only one having a fucked-up world messing with your process might make you feel less alone.

I breathed an audible sigh of relief when I reached the end of this paragraph. Not only does Scalzi confirm that he knows many who have felt similarly afflicted in their creative output in 2017, but best-selling writer John Scalzi is himself afflicted. He’s here with all the rest of us, trying to figure out how to labor in so much darkness. He makes me feel, for the first time in a long time, that we’ll get through it, once we figure out how to get our feet on solid ground—or at least learn how to navigate that quicksand. And he’s giving us the permission to indulge in art that may feel escapist or “frivolous,” emphasizing that it serves an essential purpose in and of itself.

Word. Or, rather, lack thereof. With you, man. Thanks.

Recently, a writer friend who has been feeling similarly stuck and I decided to be “accountability buddies.” We settled on producing a minimum of 500 creative words weekly, nothing else required. We share a google doc and every Monday paste our lines as proof. There’s no other pressure, not even the expectation of continuity: we’ve both posted from totally different stories each week. But what it did was ensure that we wrote at least 500 words where there had been none. And last week we had 500 more. Next week, 500 more. And on and on and on. Nothing gets you back into the mode of writing like writing something.

I’ll never be a visual artist, but I imagine there’s a similar process. Maybe you’re not ready to tackle that big project yet, but a few sketches in a week is better than not drawing at all. You never know what might emerge—and for me, that’s the wonder and power and strange magic of creativity, the reason why so many of us want to do this in the first place. So creative accountability to another person who is in turn trusting me, a process I wouldn’t have elected to undertake in the past, is my newfound approach. That’s as far as I’ve gotten, and if you’ve made your own discoveries, I’d love to hear them.

Scalzi says it’s time for us to regroup and reconfigure if we want to keep creating. The old ways are gone, and it’s time to figure out what the next step forward will be.