Twitter is not feeling the need to be kind. 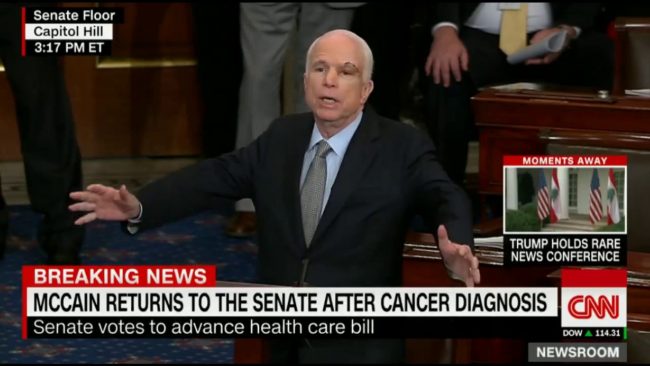 Today, the Senate passed a motion to proceed with their plan to repeal and replace the Affordable Care Act. Now the Republican health care plan will move into the floor debate phase, despite there still not being any details at all on the “replace” part. During today’s vote, there was a dramatic moment when Senator John McCain returned after a recent surgery to remove an aggressive brain tumor. He flew from Arizona to Washington D.C. just for this vote and received a standing ovation upon his arrival. He then proceeded to vote “yes” on the motion to strip millions of Americans of their health care. His was the tying vote, broken then by Mike Pence. The motion passed 51-50.

50 Senators just voted to proceed to gut health care without knowing what they will vote on. #SaveACA

So it happened. McCain returned to the Senate to a standing ovation, and promptly voted to take away millions of people's healthcare.

The circumstances of McCain’s return are pretty unbelievable.

Inspiring to see McCain risk his health so that millions could some day experience the unique freedom that comes from having no insurance.

There's a certain cruel irony of John McCain coming back to vote against healthcare, at a time when his life depends on having good care.

We pay for Senator John McCain's healthcare—He just voted to take ours away—Congress should be first to lose healthcare before any American.

John McCain left hospital stay paid by taxes on flight paid by taxes to remove health insurance from taxpayers. And we paid him to do it.

Thank you, John McCain, for teaching us the valuable lesson that even in times of extreme difficulty, people can be fucking awful.

Even more extraordinary: Following the vote, McCain spoke to his fellow senators about the devastating state of their current office. He urged his colleagues to reach across the aisle, to compromise, and to work together. He asked, “Why don’t we try the old way of legislating in the Senate, the way our rules and customs encourage us to act? If this process ends in failure, which seems likely, then let’s return to regular order.”

He said of the health care debate, “The Obama administration and congressional Democrats shouldn’t have forced through Congress without any opposition support a social and economic change as massive as Obamacare. And we shouldn’t do the same with ours.”

“We’ve tried to do this by coming up with a proposal behind closed doors in consultation with the administration … asking us to swallow our doubts and force it past a unified opposition. I don’t think that is going to work in the end. And it probably shouldn’t.”

He said that about the bill HE JUST VOTED TO ADVANCE.

JOHN MCCAIN: the thing is outrageous we need to rise about the thing it isn't american we are better than the thing
[votes yes on the thing]

should have been hearings!

I have never cared about something less than I care about John McCain feeling terrible about his terrible vote.

From one cancer survivor to another, John McCain, don't come at me with your soaring rhetoric while I'm paying for your excellent treatment.

Following the vote, there were a lot of people urging McCain’s critics to hold their tongues and not speak negatively of him, given his current health issues. To which everyone else replied:

If your thought in the immediate aftermath of that vote is "I should defend John McCain on the internet" please:

Someone tell me more about what a decent man full of integrity John McCain is. I never tire of hearing that fucking fairy tale.

McCain’s health issues do not give him a free pass to avoid condemnation. Not when he flew across the country to cast the deciding vote to advance a bill which would deprive tens of millions of people of their health care.

McCain will never face another election. Never gain or lose a committee chairmanship. What he does now tells you who he really is.

And his current fight with cancer certainly doesn’t erase his decades-long legacy.

Don't care what you say, McCain's legacy for me will be Sarah Palin and ensuring health care was taken from millions of people. #SaveACA

McCain has been voting against even the most basic LGBT rights for DECADES. U didn't know he was an asshole? Well my friends & I sure did.

There were plenty of people who hoped for more from McCain.

And he let us all down.