We already knew that John Kelly, Trump’s Chief of Staff, is not a good person. We knew it when he wrote a proposal to use National Guard troops to round up immigrants. We knew it when he straight lied about Trump’s insensitive call to the wife of Sgt. La David Johnson, insulting the gold star widow mourning the loss of her husband (as well as accusing black congresswoman Rep. Frederica Wilson of lying about the conversation), all in an effort to make Trump look like a decent human.

Still, he might have outdone his own despicable self in this interview, in which he discusses the many admirable qualities of “honorable man” Robert E. Lee. (Spoiler alert: Robert E. Lee was a brutal slaveholder who broke up the slave families on his estate; they regarded him as “the worst man I ever see.”) Kelly also gives a bizarro history lesson on the Civil War. Did you know that a “lack of an ability to compromise” is what led to the Civil War? Me neither!

Black People: hey hi we are not your property

Southerners: yes the fuck you are

Yes, according to Kelly, what happened was that “men and women of good faith on both sides made their stand where their conscience had them make their stand.”

That sounds like a familiar talking point, doesn’t it? 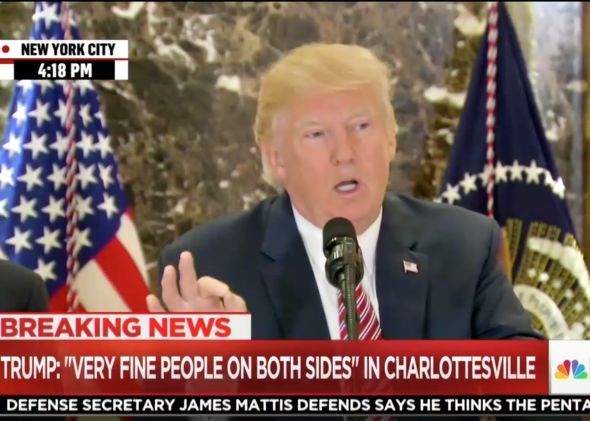 This version of history isn’t unique to Kelly. It’s common in much of the American South, from the claim that “states’ rights” were the core issue of the war (rather than the right to treat people as property) to the insistence that slaves weren’t treated all that badly and slaveowners and Confederate officers had great hearts and just, like, the best intentions.

Last night, White House Chief of Staff John Kelly said that the Civil War was a product of our failure to "compromise" and praised Robert E. Lee. It was straight Lost Cause-ism, no chaser.

He should watch this video. Everyone should. pic.twitter.com/KHYdNBd9UD

As is usually the case in times like these, Ta-Nehisi Coates is laying out all the truth we need.

Regarding John Kelly's creationist theorizing on Lee and the Civil War, its worth pointing out a few things.

You should 100% click through to read that entire thread. Here are just a few of the many perfect points he makes.

As historian David Blight pointed out “compromise” with white supremacy was how the country achieved reunion.

Notion that we are putting today’s standards on the past is, in itself, racist–implies only white, slave-holding, opinions matter.

As @AdamSerwer points out Lee wasn’t some agnostic pressed into War. He was a dude who thought torture was cool.https://t.co/Mx7nXP4isn pic.twitter.com/z7Ggh8afkK

But you do have to actually read what the people who started the War actually said. https://t.co/BBEg7k6Mfe pic.twitter.com/viIRu9tnQ8

Of course, the person who most needs to read that thread (John Kelly) obviously won’t.