Joaquin Phoenix the Next Hulk? 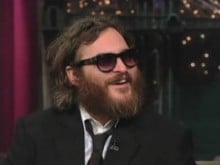 This past weekend, Marvel confirmed that Edward Norton was no longer their Hulk, and would not be reprising the role in The Avengers. However, Marvel quashed reports that they’d be bringing in a total unknown for the part, saying that they’d be casting a “name actor.” Could that name actor be Joaquin Phoenix, whose most high-profile recent role has to have been his bizarre Andy Kaufmanesque appearance on Letterman last year? Oh, and could Phoenix or whoever takes the part potentially star in another Hulk feature film?

CHUD.com seems to think so. Citing “reliable sources,” they claim that Marvel has already offered the role of Dr. Bruce Banner to Phoenix, and that they’re hoping he says ‘yes’ by Comic-Con. While they write that “whoever plays Banner will be the lowest man on The Avengers pay totem pole,” Phoenix is “taking time to mull over the offer and the bigger implications – Marvel may yet resurrect the Hulk franchise – but Marvel hopes to have him in place by Comic Con, which is when they want to announce their new Bruce Banner.”

Beyond the nerdrage and nerdlove inspired by a possible Joaquin Phoenix-Hulk, which could turn out to be either a totally paper-thin rumor or a phase in behind-the-scenes negotiations without real-world ramifications, two broader points. First, this highlights the unique power that Marvel has over actors in today’s Hollywood, where one little role is imbued not only with fan affection, but with the possibility of plenty of other cameos and even feature turns within the endlessly cross-referential universe of films. Second, — OMG stop the presses, new Hulk movie maybe?!