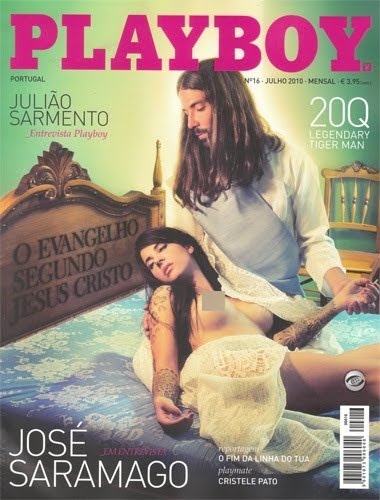 The July issue of Playboy‘s Portuguese edition features an unexpected figure on the cover: None other than Jesus Christ, who frolics with three different nude women within the pages of the magazine.

The shock value of the cover and concept is undeniable: Believe it or not, though, it’s in the service of an ostensibly higher — even literary — purpose. Last month, Nobel literature laureate José Saramago died: A national hero in Portugal, he was the only Portuguese-language writer to win the Nobel literature prize.

Saramago was an atheist, and one of his most famous novels was titled The Gospel According to Jesus Christ (O Evangelho Segundo Jesus Cristo), depicting a flawed and human Jesus: You can see the book’s title engraved into the headboard of the bed on the Playboy cover. Because that’s where you’re looking, right? It’s in Saramago’s honor that this religiously and literarily laden (and unsurprisingly, rather controversial) Jesus-with-naked-ladies photoshoot took place. 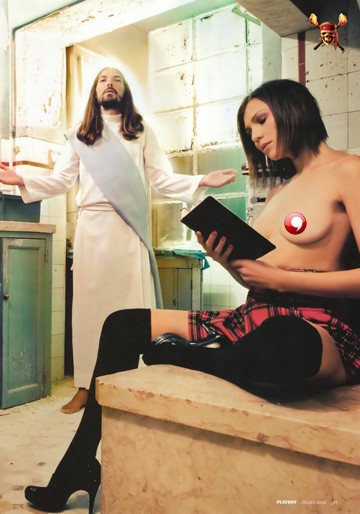 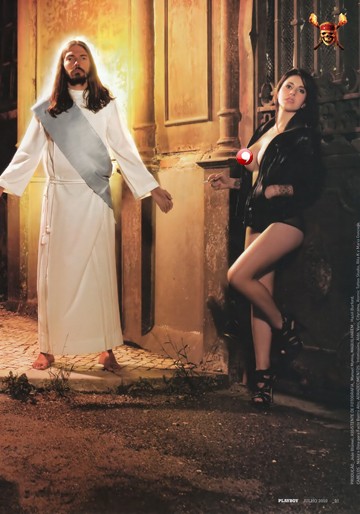 Conclude what you will about this particular shoot’s merits, but it is kind of cool that when a Portuguese Nobel laureate dies, Playboy‘s first instinct is to pull out all the stops to honor him. In their own, er, special way.

Update: Yipes. Playboy is killing off the Portuguese edition over this.