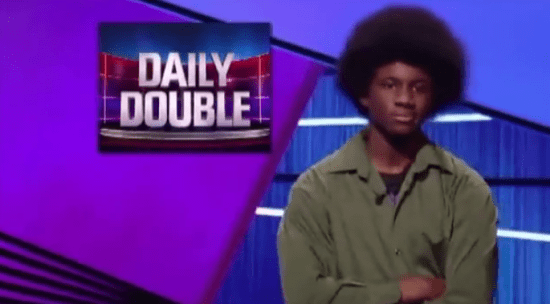 If you watch Jeopardy! regularly then you know how the rules work. If you don’t watch Jeopardy! regularly, you need to reassess your priorities because you’re missing a perfect half hour of television. If a contestant goes into Final Jeopardy with more than twice as much money as their opponents, they can not lose. That was the case last night when Leonard Cooper won $75,000 in the Teen Tournament by giving one of the best Jeopardy! answers of all time, because he knew his answer didn’t matter.

After what host Alex Trebek called a “gutsy move” — betting $18,000 of his $18,200 on a Daily Double with one minute left to play — Cooper pulled into an unbeatable lead by knowing that the titular 12 Angry Men were serving on a jury. Going into Final Jeopardy, his opponents couldn’t touch him.

The smart play when you have the game on lock is to wager $0 in Final Jeopardy and try to answer the question anyway. If you’re right, you look smart. If you’re wrong, it doesn’t matter because you won anyway and didn’t lose anything for being wrong. The bold play is to use the written answer to make a joke, and that’s exactly what Cooper did.

In response to the Final Jeopardy clue:

You sure did, Mr. Cooper. You sure did. You see the video below in case you missed it last night.