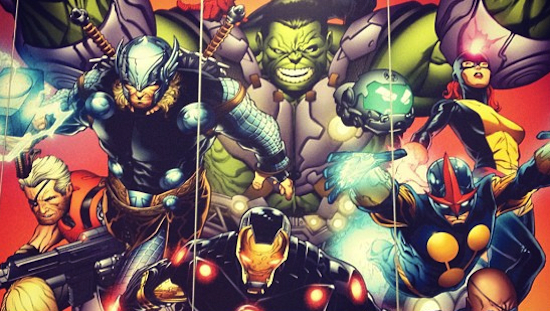 Comic book geeks everywhere rejoice, now you can watch an episode of Jeopardy! without pretending you’re muddling over the clue like you know the answer. This Thursday, December 13th, the Walt Disney Company is certainly taking advantage of its ownership over ABC and Marvel Comics by introducing a Marvel NOW! category to the quiz show’s game board. Because, you know, everybody in America knows the minutiae surrounding the continuity of the X-Men franchise.

The Marvel NOW! category will reportedly feature questions drawn from Marvel’s recent semi-reboot of their flagship titles such as Iron Man, Captain America, and The Uncanny Avengers, so we’re going to go out on a limb and assume that more pedestrian level clues about the Marvel Universe are out of the question. That and the contestants’ frame of reference will likely be based on the shows from the 1970s and recent movies.

This isn’t to say we can’t have any fun while we watch this very special Jeopardy! episode. You can turn it into a rollicking game of “Marvel Incompetence Bingo.” Things to look out for include a contestant answering with “Who is Batman?” and another thinking that constantly dropping the name Stan Lee will give him or her some kind of advantage.