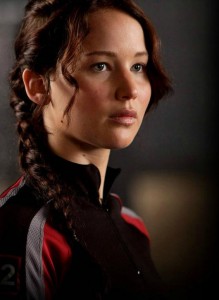 It’s hard to say you identify with someone who’s facing life and death and war. It’s not like, ‘Oh my God that’s, like, totally how I feel.’ But there is the connection in that she doesn’t feel like just part of the town anymore. Now everyone treats her as a celebrity… Whereas she still feels like she’s part of them. I get that a lot. I’ll go to get a coffee where I always get coffee and all of a sudden there’s this weird mood, and I’m like, ‘Come on, I still get coffee here, just say hello.’ – Jennifer Lawrence

It’s one thing to have an incredibly popular book about an intensely televised and obsessed over reality show where contestants are expected to be as beautiful and deadly as possible regardless of their true personalities. But once you bring that story to film, it takes on an entirely new metatextual level that’s fascinating to explore.