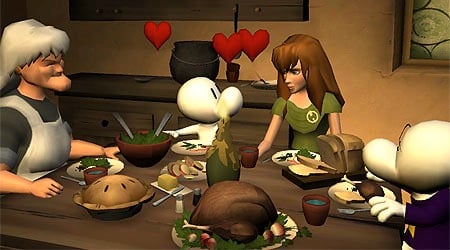 Just last week, Jeff Smith was talking to Reddit about the ongoing process of getting a film adaptation of his long running Bone series, but without a lot of details, naturally. But just yesterday, he was talking to The LA Times about it, and it turns out there’s actually been some significant progress made.

Warner Bros. is currently in charge of the adaptation of the long series into a computer animated trilogy.

“I’m a comic book guy, I’m not a movie guy,” he explained, adding that he’s “actually excited about the movie for the first time in a long time” after having seen a four-minute “Bone” short recently put together by Warner Bros.

“Fone Bone was falling in the water and going through cliffs and canyons. The dragon moved in from off camera in the shadows with smoke around him, all in 3-D. It was pretty mind-blowing,” said Smith, who estimates that the earliest a “Bone” film would be done is two years from now.

While it would have been great to see some 2-D animators take a crack at bringing Smith’s very much Carl Barks-esque character designs to life, a well made CGI animated film might also be able to present the visual dualism (between the very cartoony Bones and the much more realistically drawn… everything else) of Bone in a compelling way.

(Don’t worry, the movie will undoubtedly look better than the screenshot above of Telltale Games’ Bone adventure games.)

Hopefully we’ll see some official news about the movie from Warner Bros. soon.

Bonus irrelevant information: My personal never-gonna-happen pipe dream of a Bone movie is one put together by Hayao Miyazaki. Think about it.