You Can Now Get Bone Digitally, and Talk to Jeff Smith on Reddit 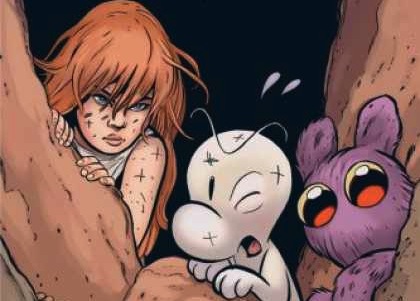 There are two exciting Bone-related items of news today, and so it gives us a chance to plug this classic comic series that contains its fair share of totally kickass women and is totally entertaining for adults while being appropriate for children, too. As a geek girl site we’re obliged to mention Grandma Ben and her granddaughter Thorn as both examples of kickass warrior women and princesses who were not of the flouncy, lacy, waiting to be rescued type. So, if you’ve ever thought about getting into Bone, now might be a good time, since the entire story has recently become available digitally on Comixology and is on sale for a week at 99¢ an issue.

Now, a total of fifty-five issues at .99 each is certainly cheaper than picking up Scholastic’s nine full-color collected editions ($60-$100 depending on whether you’re looking at an Amazon discount or not), and way, waaay cheaper than picking up the only other way to get all of Bone in full color: the one volume, limited edition, hardcover, 1,400 page, $350 doorstop collection. However, it’s about twice as much as the collected black and white doorstop edition, so, pick your poison.

The series is offered in honor of Bone’s 20th anniversary (the first issue came out in 1991 oh god 1991 was 20 years ago), and in order to publicise it, Bone creator Jeff Smith himself is doing an AMA (Ask Me Anything) on Reddit as we speak. It’s only been fifteen minutes, and there’s already some very exciting stuff on there:

The script for the Bone film is being written now. We had a few tries on the script over the last two years that didn’t work out too well. The current one seems to be very much in the spirit of the Bone comics and everyone is very excited!

You should definitely go check it out, but ask your questions quickly: Smith has to log off at 6pm eastern time.