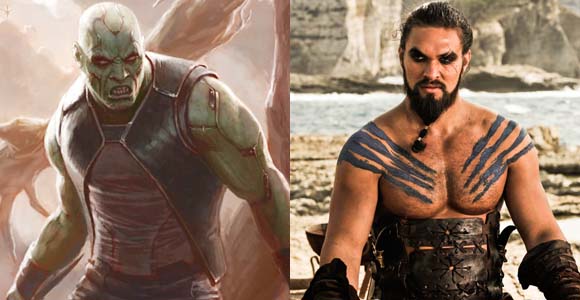 Not there there’s a lack of muscle-bound dudes in Hollywood but it makes me very happy to think Game of Thrones’ Jason Momoa may land the role of Drax the Destroyer in Guardians of the Galaxy.

The unconfirmed news comes from Latino Review who say Momoa recently screen tested for the part. They also go on to say he impressed the Marvel executives so much they’ve already offered him the job. Borys Kit from The Hollywood Reporter tweeted to say Momoa did indeed test, but has not been offered the role yet.

Isiah Mustafa, Dave Bautista, and Brian Patrick have also read for Drax according to earlier news.

If the news turns out to be true this would be the second Game of Thrones actor this week to enter the Marvel film universe. Although not connected to the rest of the Marvel movies, we recently found out Peter Dinklage will be a major villain in X-Men: Days of Future Past. Coincidentally enough, Momoa’s counterpart on the HBO fantasy series, Emilia Clarke, was up for a part in the Captain America sequel last year. However, that eventually went to Revenge actress Emily VanCamp.

Momoa would join Chris Pratt, previously confirmed to be playing Star-Lord, in the film as a human whose soul is placed in a more powerful body in order to fight Thanos (that purple guy at the end of The Avengers).