Jammie Thomas-Rasset, the Minnesota mother of four who has fought the RIAA for the past four years over 24 songs that she illegally downloaded and shared over P2P network Kazaa and has become something of a high-profile figure due to her refusal to settle, was handed a stiff verdict on Wednesday: A jury ruled that Thomas-Rasset should pay Capitol Records $1.5 million for those 24 songs, breaking down to damages of $62,500 a song.

While the RIAA, which can on rare occasions smell PR poison before it drinks it, has said that it doesn’t intend to make Thomas-Rasset pay the full fine, having previously offered to settle for “$25,000 and an admission of guilt,” this latest ruling, which marks the third in Thomas-Rasset’s case and is subject to further appeal, shows that the days of astronomical piracy suit valuations are far from over.Yahoo recounts the case’s history:

Thanks to Thomas-Rasset’s colorful case, she has become the public face of the record industry’s battle with illegal downloaders. In her first trial, in 2007, the jury demanded she pay $222,000 for violating the copyright on more than 1,700 songs by Green Day, Aerosmith and Richard Marx, to name a few. (Marx said he was “ashamed” to be associated with the “farcical” prosecution of an illegal downloader.) Thomas-Rasset maintained she wasn’t the computer user who did the file sharing, and her legal team cited an error in jury instruction to secure a second trial in 2009 that ended with a much harsher result: an astronomical fine of $1.92 million. However, earlier this year a U.S. District Court judge found the $1.92 million penalty against Thomas-Rasset to be “monstrous and shocking” and “gross injustice” before lowering it to $54,000, or $2,250 a song. Thomas-Rasset and her legal team decided to appeal that decision, too.
…
“Now with three jury decisions behind us along with a clear affirmation of Ms. Thomas-Rasset’s willful liability, it is our hope that she finally accepts responsibility for her actions,” the RIAA said in a statement.

In case you were wondering what those 24 tentatively $62,500 songs are, this table from Wikipedia breaks them down: 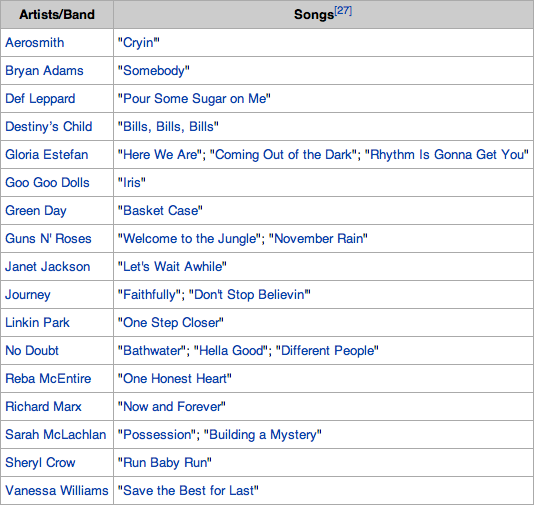