“Daddy’s going to be in Spider-man“ 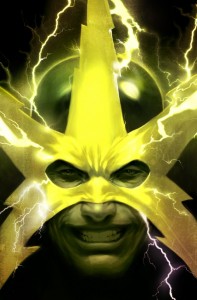 [My daughter] dressed as Spider-Man for Halloween and had a Spider-Man jumper. Yesterday, I took her to the set, she didn’t know [that I had been cast], and she says, ‘What is this?’ I said, ‘Daddy’s going to be in ‘Spider-Man. She says, ‘Is Spider-Man going to beat you up?’ and I said, ‘I don’t know.” She says, ‘Good.’ – Jamie Foxx, who will be playing the villain Electro in the upcoming sequel to The Amazing Spider-Man.

According to Foxx, his daughter also had a Spider-Man themed birthday party last year. Welcome to the fold, Ms. Foxx, and if anybody tells you you’re faking it, make sure they know your dad’s gone toe to toe with Spider-Man and the Fantastic Four.

Previously in The Amazing Spider-Man 2