James Marsden Thinks the World Could Use a Cyclops Movie 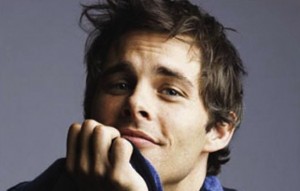 According to James Marsden, who played Scott Summers/Cyclops in the first two X-Men movies, those first two movies didn’t have a whole lot of James Marsden in them. At least he didn’t think so. So he thinks it’s high time Hollywood made a movie about Cyclops and only Cyclops. Now, it understandable for an actor to feel like he may have been overshadowed in a big ensemble film. But is it the right time to throw around the idea of a Cyclops movie? Considering we just got over X-Men Origins: Wolverine? It might be too soon, James Marsden. Too soon. Or too late.

Don’t get us wrong — Marsden doesn’t come off as bitter in this interview with ET Online, just disappointed. Maybe a little cheated, like “I coulda been a contender!” And we also happen to think he’s a fun dude. (Come on! Enchanted!) But maybe, just maybe, rather than pull for a movie about a character whose storyline was ruined by Brett Ratner and risk the same fate as Wolverine by getting an extremely lackluster solo flick, it’s time to try something else. A different character. Unless he is dead set on his Marvel superhero getting another chance, and that’s sure what it sounds like:

It was great to be a part of those movies, people loved them — it’s still the thing I get recognized for the most — but I feel like because there were so many cast members in this 90 minute movie, there was never enough time to give him the depth that other characters had. The first movie was really Wolverine’s saga — and the second and third as well. If I had a dollar for every time someone came up to me on the street and said, “I would have loved to see more Cyclops…

… I don’t think his character was ever fleshed out as much as I would have liked. I may have also been a bit on the young side for those films. If I could go back and put on the glasses and suit again where we do a film to learn more about the character, that’s the one I would pick. He’s ripe for that.

In other words, Marsden wants a do-over. But does the moviegoing audience feel the same way? Maybe he should conduct an informal survey outside the Papaya King, because his last appearance there sure as heck got a lot of attention. We will so meet him there, surveys in hand.