iTunes Says That Jailbreak is a Dirty Word | The Mary Sue

According to iTunes, “Jailbreak” is a Dirty Word 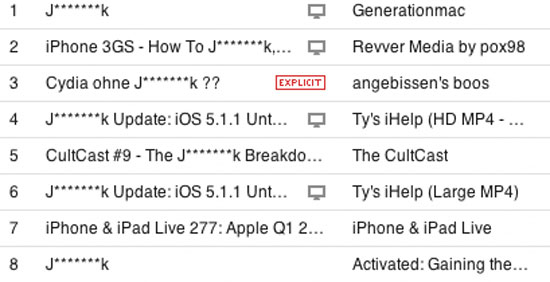 Over on iTunes, “jailbreak” has apparently become so reviled that Apple has removed most references to the word. Its offensive powers have been curtailed by reducing the word to “j*******k” and has joined such classics as “f**k” and “s**t” as words unspeakable on iTunes. It’s also likely to set a record for the use of amount of asterisks in a single word.

What’s amazing about the iTunes ban on j*******k is that it has been applied to all media available through the online store. Podcasts, movies, TV shows, and even the Thin Lizzy classic, “J*******k.” The word still appears in the textual descriptions of media, but its use in titles is completely banned. This also extends to the iTunes mobile store.

Grammatical variatons, however, still persist. For instance, an app has ingloriously been retitled J*******k, while Jailbreaker 2 is allowed to roam free. No doubt terrifying old ladies and church-goers with its horrific un-asterisked spelling.

While Apple’s displeasure with the word — and the implications it has for their smartphone — is clear, it is still completely searchable on iTunes. Type in any swear, cuss, or foul language into iTunes and it will dutifully return a result — albeit, laden with asterisks. Though it is apparently loathe to separate consumers from their media, Apple’s response to its inability to keep people from jailbreaking their phones is to throw a hissy fit on iTunes.