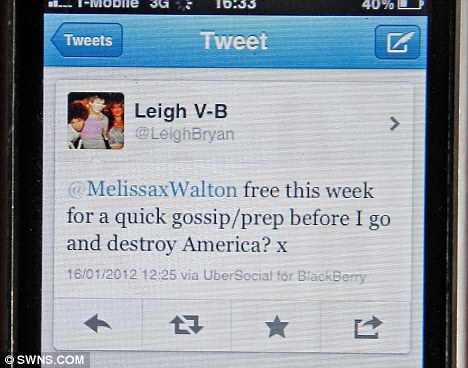 Leigh Van Bryan, a bar manager from Coventry, England, was planning on having a very good time during his trip to these United States last week. In a series of tweets, he announced his intention to party his ever-loving brain out while in the U.S.. His words were, perhaps, a little a crude, but Van Bryan could not possibly have imagined the furor his flippant tweets would earn him. When his plane landed at the Los Angeles International Airport, Van Bryan and his companion Emily Bunting were arrested. For tweeting.

And what were the content of Van Bryan’s horrific tweets? A plot to overthrow America, or a secret string of key words cracked by a team of investigators at Homeland Security? Prior to leaving the U.K., the Daily Mail said Van Bryan tweeted:

Free this week, for quick gossip/prep before I go and destroy America?

He also threatened some of our most valuable landmarks in a different tweet, curse redacted by the Daily Mail:

The law enforcement officers that detained Van Bryan and Bunting apparently lacked a sense of humor, or at least common sense enough to realize that this pair was completely innocuous. Van Bryan says that his attempts to explain his comment about “destroying America” simply implied that he intended to party extremely hard while in the country. Not only did investigators not believe him, they also weren’t fans of the American television program Family Guy, from which the comment about exhuming Marilyn Monroe comes.

Instead, investigators took the tweets completely seriously. Their luggage was searched, Van Bryan saying that investigators were looking for “spades and shovels” with which to dig up the long-dead American icon. They went on to accuse Bunting of intending to play the role of lookout at Monroe’s tomb (she has a tomb?) while Van Bryan did the deed.

After spending 12 hours in custody, the pair was put on a plane headed to Paris. They were told that they would have to apply for visas from the U.S. embassy if they ever intended to visit the United States in the future. The Daily Mail quotes the charge sheet for Van Bryan:

This bizarre and infuriating series of events highlights the continued struggle within U.S. law enforcement to not only understand modern culture and modern communication, but to apply the zero tolerance policies enacted after the tragic events of 9/11. Though that struggle must surely be difficult for enforcement officers, why they felt it was worthwhile to waste their time on so obviously innocuous tourists is simply beyond me. The argument that any and all threats must be taken seriously is often applied when these kind of accidents occur. However, if anyone — including U.S. officials — believe that these tweets were a serious threat, then they are clearly not competent enough to perform their jobs.

Perhaps the greatest irony in this affair is that earlier this month, President Barack Obama called for increased U.S. tourism and the official White House twitter account began listing great sites within the U.S. that foreigners might want to vist. If the reception Van Bryan and Bunting experienced is what would-be visitors to this country should prepare for, perhaps the President’s office should rethink their tourism campaign as well as the function of Homeland Security.

(image and story via Daily Mail via BoingBoing)