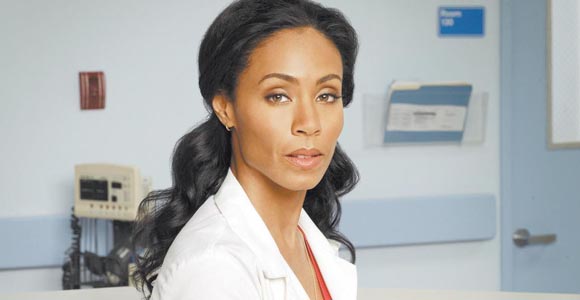 Well this is definitely interesting.

Hawthorne star Jada Pinkett Smith has been cast in Fox’s Gotham pilot, set to start shooting next month. But who is she playing? Interestingly enough, a villain. And not just any villain, a big Gotham City crime boss.

Only, she has quite possibly the worst character name in history – Fish Mooney. Yes, that’s the name we previously heard for Future-Penguin’s (aka Oswald Cobblepot) boss. Entertainment Weekly has this description of Pinkett Smith’s character: “a sadistic gangster boss and nightclub owner, she’s got the street smarts and almost extra-sensory abilities to read people like an open book. Imposing and hotheaded, she’s not one to be crossed.”

It’s certainly cool to see a woman being put in such a position of power on the show (we saw a similar plot choice in Batman #28) though considering who works under her, it’s likely only a matter of time before she’s killed off and Penguin replaces her. Also liking the small hint of super powers.

Gotham’s cast so far: Ben McKenzie is set to lead the series as Jim Gordon, Donal Logue will be assisting him as Harvey Bullock with the supporting cast of Sean Pertwee as Alfred, Zabryna Guevara is Sarah Essen, and Erin Richards as Barbara Kean. Robin Taylor has will be playing The Penguin. Young Bruce Wayne has yet to be cast, though we did get a casting call description recently.